In the latest issue of EMPIRE MAGAZINE, J.J. Abrams opened up about The Force Awakens. Most notably to me was his discussion about the Force and lightsaber fights.

He talked about the lightsaber battles in the prequels,

“They became increasingly spectacular and stylised, almost like dance choreography.When you look at Star Wars and Empire, they are very different lightsaber battles, but for me they felt more powerful because they were not quite as slick. I was hoping to go for something much more primitive, aggressive and rougher, a throwback to the kind of heart-stopping lightsaber fights I remembered being so enthralled by as a kid.”– JJ Abrams

I agree with Abrams that, at times, the lightsaber fights became stylized and over choreographed. To me, it felt like the Chinese wire fighting styles from The Matrix on steroids. The abilities of the Jedi in the prequels bordered on God-like, as they were able to run super fast, jump or fall great distances and stop seemingly unlimited blaster bolts and more! Skip 20 years later to Luke Skywalker where it was a struggle to just use the Force to make his lightsaber float to his hand. Even Vader in the original trilogy seemed subdued with his lightsaber/Force skills. That being said, I fear a return to the style of lightsaber fighting from the original.

Audiences have experienced many advancements on how Hollywood portrays battles, combat, and hand to hand fighting. We have moved from the old sloppy Cowboy movie “haymakers punches” to modern techniques as seen in movies such as Winter Soldier, The Transporter, Blade and more. As a kid, my favorite scenes from the original trilogy were the lightsaber scenes between Luke and Vader. They still are to this day although, as I have grown and experienced the progression of action films and my own experience in martial arts, I find myself sometimes cringing. There has to be a balance between the high flying “dancing” of the prequels and the slow back and forth stage combat of the originals.

With the introduction of Kylo Ren’s longsword style lightsaber, I had hoped that Abrams would introduce other more subdued and authentic styles such as those in Historical European Martial Arts. The style of sword combat in this area are a perfect and realistic balance that is neither “overly flashy” or “slow”. A sample can be seen in the following video (ignore the costumes).

My favorite style in any of the Star Wars films was performed by Count Dooku. I had always thought he used a “rapier fencing style”. I have a small Italian rapier background and was drawn to it in the prequels as well as The Clone Wars. Apparently, Dooku was using a Jedi fencing style called Makashi. A sample of this can be seen in the following video.

I realize that there hasn’t been the presence of the Jedi in decades and that untrained characters such as Kylo Ren and Finn would likely use their lightsabers like we all used to as kids pretending to be Jedi’s fighting with sticks, but would Luke not have progressed with his training in this area? Would Luke not have a far superior fighting style than he did in the original trilogy? 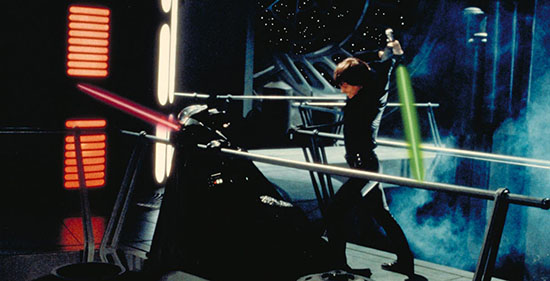 This, of course, may be exactly what Abrams meant when he said “More primitive, aggressive and rougher”, for lightsaber fighting and we won’t know for sure until December 18th.

What style of Jedi fighting style did you like the best in the Star Wars films? Who was your favorite?

About Steve Fitch 547 Articles
From the moment Steve Fitch first watched Star Wars: A New Hope in the theater when he was a child, he wanted to be Luke Skywalker when he “grew up” (and STILL does!). He now shares this passion with his wife, two daughters, friends and fans. Steve is the Founder of Star Wars Reporter and when not immersed in all things Star Wars, you can find him training in Muay Thai, Italian Rapier, all things VIKING, or spending time with family and friends. FOLLOW Steve on TWITTER: @WookieeSteve