At least that’s what everyone seemed to think back in 1987. Return of the Jedi had been released four years ago and the adventures of Luke, Han, and Leia had come to an end. Marvel’s run of Star Wars comics ended in 1986 after poor sales. While Star Wars had certainly changed the cultural landscape and the way movies would be made forever, its time had passed. Other things had captured the minds and imaginations of the generation.

In 1987, Dungeons & Dragons was both successful and controversial. Its runaway success lead to thousands of avid fantasy fans engaging in epic adventures at the kitchen table. They saved maidens, slew dragons, and acquired artifacts untold. It was a tabletop roleplaying game – the first of its kind. Players of the game gathered together to cooperatively tell a story of high fantasy and epic heroism with their own original characters taking center stage. No board. No controllers. Just a few friends, some dice, and a whole lot of imagination.

With the success of D&D came other tabletop roleplaying games, many set in familiar worlds. Chaosium’s Call of the Cthulhu allowed gamers to take up the role of ill-fated investigators exploring the madness of H.P. Lovecraft’s literature. Iron Crown Enterprises introduced Middle-earth Role Playing let them take up the role of humble hobbits and noble Rangers in an effort to defend Tolkien’s world from the forces of Sauron. Marvel Super Heroes gave them the chance to put on a pair of web-shooters and save New York City in a 4-color world filled with art panels and speech bubbles.

A small company out of Pennsylvania, West End Games, had seen some success with their licensed Ghostbusters RPG. It came as quite a surprise when they announced the release of The Star Wars Roleplaying Game. No

t only would gamers have the opportunity to explore a galaxy far, far away – they would be able to do it with their own original heroes. Dashing smugglers, noble senators, would-be Jedi Knights and dozens of other Rebel freedom fighters would stand up to the tyranny of the Galactic Empire with little more than a character sheet and a hand full of dice.

No one expected The Star Wars Roleplaying Game to be a success. Star Wars was a dead license, after all. But it became not only one of the best selling RPGs of that year, but one of the best selling RPGs of all time. Almost 30 years after it’s release, it’s still got a rabid fan base actively playing the game. I should know, I still own three copies of the original core rule book!

The Star Wars Roleplaying Game would continue to be published by West End Games using their flagship “D6 System” for twelve years before their license ended in 1999. They produced over one hundred books during this time. But the game lived on, even as West End Games fell victim to bankruptcy.

In 2000, Wizards of the Coast acquired the license to produce a new Star Wars RPG. They would produce over twenty books under their d20 system before releasing a new edition of the game called “Saga Edition,” which customized the d20 system to more suit the cinematic style of the Star Wars universe. The Saga system would see sixteen books in its product line before Wizards of the Coast opted not to renew their license in 2010.

The Star Wars RPG torch would be picked up in 2012 by Fantasy Flight Games. Taking game design in a new direction, the current license holders have produced a game that uses a unique system with specialized dice that are customized to Star Wars galaxy. Known for its high production values and quality products, Fantasy Flight Games surprised the industry by announcing they’d be releasing three complete Star Wars RPGs, each focusing on a different aspect of a galaxy far, far away. Edge of the Empire would deal with smugglers, bounty hunters, and other wretched scum trying to make their way in the galaxy. Age of Rebellion let players take on the role of heroic freedom fighters in the service of the Rebel Alliance. Force & Destiny gave gamers the chance to explore the mysteries of the Force by taking on the role of Jedi and other exotic force-users. Each of the three games was completely compatible with the other two, but also stood alone as its own independent game. This, combined with specialized dice which allowed players some measure of control over the details of how their characters succeeded and failed in their endeavors, made the Fantasy Flight Game truly unique to its predecessors.

Finally, there is Star Wars:Revised, Expanded & Updated – which surfaced in 2015. This is an unofficial, not for profit game created by an online community of fans of the original West End incarnation of the game. Taking material from across West End Games’ over one-hundred supplements, these fans cleaned up and compiled rules from the early days of Star Wars gaming and brought it to life through collective effort. There is some controversy around Star Wars: Revised, Expanded, & Updated, as it is both unofficial and unlicensed by Lucasfilm or Disney. 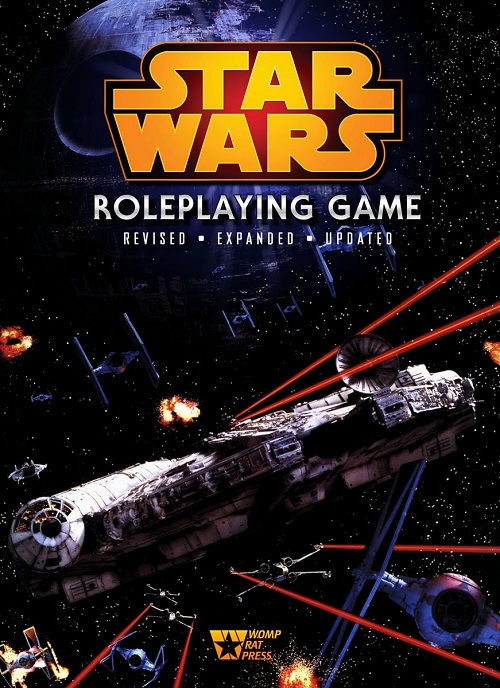 A Gaming Table Far, Far Away is a twelve part exploration of the history of Star Wars as a tabletop roleplaying game. In addition to an introduction and conclusion, we will explore each incarnation of the Star Wars RPG that has come to be since 1987. Next week, our saga begins with The Star Wars Roleplaying Game, published by West End Games. I hope you’ll join me, and maybe become along the way you’ll role a make a hero of your own, roll a few dice and have an adventure that changes the galaxy.