In recent years Dave Filoni and his band of ragtag rebels have brought a plethora of magnificent Star Wars stories to the small screen with Star Wars: The Clone Wars and Star Wars: Rebels. It was action-packed, exciting, and something Star Wars fans had never seen before. Or had they?

The truth is that Star Wars stories have been told through animation very nearly from the beginning. In 1979 the much maligned Star Wars Holiday Special. Packed between a bartending Bea Arthur and a singing Carrie Fisher viewers who were able to endure what is now regarded as a travesty (and fortunately no longer canon) were treated to a ten minute animated short that introduced the fan favorite bounty hunter Boba Fett. What is especially strange in hindsight (other than the very psychedelic, 1970s animation style) is that the mysterious bounty hunter was an ally to Luke, Han, Leia and Chewie. It is often regarded as the only serviceable thing to come out of the Holiday Special.

Star Wars remained locked onto the silver screen once more until 1985. On September 7th, 1985 young fans were introduced to the Lucasfilm produced cartoons Droids: The Adventures of C-3P0 and R2-D2 and Star Wars: Ewoks. While many modern fans will argue about the inconsistencies with what is now considered part of the “Legends” canon, one must remember that these Saturday morning cartoons were exactly that: simple Saturday morning stories of fun and frivolity. I recall gleefully watching them as an eight year old boy and upon watching them over 30 years later, they are a snapshot in time of 1980s animation. They ooze nostalgia and I just wanted to put on my Return of the Jedi pajamas and get a bowl of Captain Crunch.

Still, in spite of the fact that Droids and Ewoks have not aged particularly well, they did draw upon the Lucasfilm sound archive and sound designer Ben Burtt were involved in the creation of these shows. Anthony Daniels himself even reprised iconic role by voicing C-3P0 in Droids. So if you can get your hands on the DVDs that were released in 2004, sit down and enjoy them for what they are: harmless fun.

It would be nearly twenty years before Star Wars was animated again via Star Wars: Clone Wars in 2003. This time it came to us from Genndy Tartakovsky of Samurai Jack fame. Using Tartakovsky’s signature style, over-the-top visuals,  and stories told at a breakneck speed. Both season one and season two of Star Wars: Clone Wars are told in three minute micro-episodes that give the viewer a front row seat to the scale and scope of the Clone Wars. Anakin, Obi-Wan, Mace Windu, and Yoda are larger than life heroes who accomplish amazing thing that go beyond the scale of the prequel trilogy. 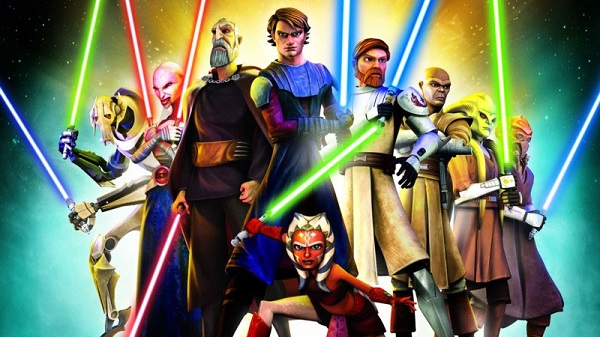 Viewers are also treated to their first dose of James Arnold Taylor as the voice of Obi-Wan Kenobi. Taylor would go on to embody the famous Jedi Master on the small screen. We also see hints of the Dark Lord of the Sith Anakin Skywalker will become and are introduced to the deadly assassin and fan favorite Asajj Ventress. Star Wars: Clone Wars would also tie directly into the then-unreleased film Star Wars: Episode III: Revenge of the Sith by depicting the capture of Palpatine and introduction of General Grevious in the moments before the Battle of Coruscant.

Viewers would return to this iconic struggle in 2008’s Star Wars: The Clone Wars. This time, we got a 3D animated TV series with the now legendary Dave Filoni at the helm. The concepts and ideas introduced in the 2003 animated series would be expanded exponentially over six seasons and 121 episodes. Suddenly, Anakin’s relationship with Obi-Wan and his romance with Padme were given the depth and believability that was absent from the prequel films. The nature of the Force was explored. The Clone Army of the Republic was given depth and heart that made their betrayal that much more powerful. And, of course, we were introduced to one of he most iconic characters in Star Wars: Ahsoka Tano. Tano would become a beloved iconic and key figure in a galaxy far, far away whose power and presence impacts the entire Star Wars canon to this day. In short, for six years Star Wars: The Clone Wars kept the franchise vibrant and relevant while helping to truly build a galaxy torn apart by war.

Filoni and much of the crew behind Star Wars: The Clone Wars would return in 2014 with the first post-Disney Star Wars creation: Star Wars: Rebels. Stepping out of the prequel era, viewers would follow the adventures of young Ezra Bridger and the crew of The Ghost as they struggle against the tyranny of the Galactic Empire at its zenith. The show begins five years before the events of the original film, Star Wars: A New Hope. While Filloni was telling a wartime serial in Star Wars: The Clone Wars, in Star Wars: Rebels he is telling the story of a family. Not a traditional family, but a family of outcasts thrown together by the losses they have suffered at the hands of the Empire. 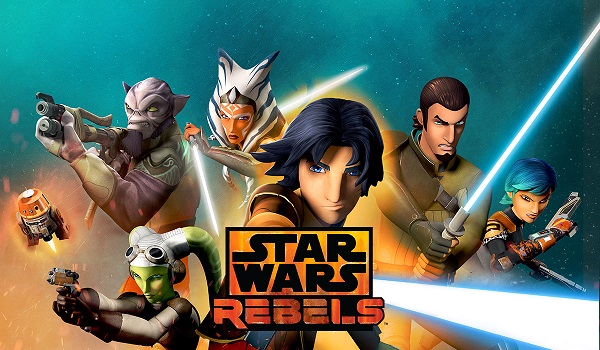 Rebels saw the inclusion of major characters from the original trilogy. Billy Dee Williams reprised his role as Lando Calrissian and we got to see a young and idealistic Princess Leia Organa. A true gem is, of course, the return of James Earl Jones as Darth Vader. He is portrayed perfect, shrouded in fear and darkness. But Rebels wasn’t limited to just the original trilogy. We saw the return of Ahsoka Tano, Captain Rex, and even Darth Maul – all featuring the original voice actors who had performed in Clone Wars.

As Star Wars: Rebels draws closer to the events of Rogue One and A New Hope, fans are left wondering how Hera, Kanan, and the rest relate to these films. Since the show as been renewed for at least a third season, we’ll undoubtedly get both more answers and more questions.

Given that Star Wars has a rich history of using animation as a story telling vehicle and Disney is the unparalleled master of the medium, I think it’s safe to say that we can look forward to small-screen heroes and villains for years to come.