From Director, Stephen Vitale, comes a Star Wars fan film that shows the journey of a young Padawan to “becoming one with the Force”.

The simple story and solid acting by Anna Akana is what powers the film in this cinematic Star Wars backdrop.

We again see this recurring theme in Jedi training. To fight while blinded. Who could forget the scene in A New Hope, where we get our first glimpse at the training of a Jedi as Ben Kenobi places that blinding helmet onto Luke? This same lesson is what Kanan has had to learn in Star Wars Rebels, as his eyes were blinded at the end of season 2. We can also see this in the upcoming Star Wars film, Rogue One in the blind and “Force Sensitive” character, Chirrut Îmwe played by Donnie Yen. 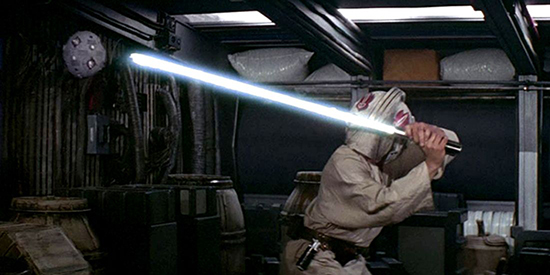 The “blind master” theme is not new in film and stories. This has been a common theme from Chinese martial arts films, television and even comics. There is something compelling about a hero who overcomes a disability and defeats an evil foe. Is it because it shows the inner strength that we can all achieve? To look inside ourselves and and move forward? Whooa!

Perhaps this is what the Jedi Master wanted Hoshino to prepare for when he tells his blind-folded Padawan to “fight the darkness”. To prepare for the worst and to give your best if it happens.