Han Solo: A Smuggler’s Trade is the crowd-funded fan film taking the internet by storm. Starring Jamie Costa in the iconic role, it gives fans a glimpse into the scoundrel’s life before he became the famous hero of the Rebel Alliance fans know and love. Executive Producer Jadon Gauthier was kind enough to sit down with Star Wars Reporter for a little Q&A about how A Smuggler’s Trade came into being and what it takes for passionate fans to bring a sincere Star Wars story to viewers that remains true to the spirit of the character and the galaxy far, far away.

Doing a Star Wars fan film is no small task. What made you decide to work in a galaxy far, far away instead of in another intellectual property or your own original setting?

Jadon: First, truly thank you guys for sharing about the film, we’re stoked that people are enjoying it.

So the script came about after an encounter between our lead actor Jamie Costa and one of the writers, Nathaniel Nauert, on a 48hr film project. Nate wrote me this, “I had such a great experience working with Jamie and talking about possible future projects and after seeing Jamie’s Harrison Ford Vine videos I was so inspired after our meeting that I raced home and got right to work on the script (originally titled “The Quest,” I believe, though I admit I like “Smuggler’s Trade” better).”

I think Jamie saw it as on opportunity to show his acting abilities beyond strictly impressions. I am very glad he did, because knowing Jamie personally and having now worked with him, he really is a talented guy that I would love to see do more.

For me, I heard about the IndieGoGo project and thought, “Oh man, I want to join on aboard.”
I was inspired by a MoviePilot article from last year. The article was a response to a fun Han Solo Mock Audition ideq Jamie created. The article, written by Eleanor Tremor, was titled, “We Found The Perfect Actor For The Han Solo Movie & He’s Not On Star Wars’ Shortlist… ” and it just had such a fun positive belief that Jamie would make a great Han Solo. I thought it would be a great project and really wanted to produce more. It was a too good an opportunity to think we could right now make the type of film that we all want to make on a larger scale one day.

It allowed us to create the type of movie we want to make in the future: Good, old-fashioned, adventure filmmaking.

And, maybe, just maybe in a galaxy far, far away Disney might catch a glimpse of Jamie. (laughs) That didn’t happen, they announced Alden before we finished, but it was a fun dream for sure!

In choosing Star Wars, what of the more subtle elements where you concerned with capturing beyond the easy tropes that appear in so many other fan films?

Jadon: Number one would be making Han and Chewie believable and making them feel as high quality as possible. You will never beat Harrison Ford or Peter Mayhew, but I think Jamie is truly so fun to watch and brings that essence to the screen, our Chewbacca, Cory Daniel, has AN INCREDIBLE outfit and Chewy’s mannerisms and timing down great.

On top of that, honestly we wanted to be detailed in as many places possible. My hope was to make more than a fan film, but perhaps a solid, well-crafted short independent film. Also, nowadays you have to compete with awesome fans film like Darth Maul Apprentice, Hoshino and Kara, you can’t slip up, the game is on now. So, we hoped and prayed to bring on as many professional people that we could. To our luck, we got some great people to join on board to up the production value, including Kris Kimlin, the cinematographer of Woodlawn, Addi Esson an up-and-coming production designer, and close to my heart, my good friend Andrew Gerlicher, a young composer that actually had the score recorded by an orchestra live.

One of the nods to what is now known as “Legends” material is what I presume is the appearance of Dash Rendar (who originally appeared in the novel Shadows of the Empire). According to your Indiegogo page the film is set “not too long before the events of A New Hope.” Given that Solo, as we see him in your film, is clearly still neck-deep in the criminal underbelly of the galaxy, did you have this particular point in the Star Wars timeline from the early drafts of A Smuggler’s Trade? It feels as though the film could be set any number of years before Episode IV: A New Hope, or even before The Empire Strikes Back.

On the flip side, the film also has subtle nods to The Force Awakens. Apparently, Captain Solo has a habit of losing his ship given the events of both your film and Episode VII. Putting the Millennium Falcon on film isn’t easy, whether done via miniatures, sets, or CGI. Was the absence of the Falcon done simply due to the tight budgets of independent films or as a conscious story element that was present from the beginning?

Jadon: Yeah, we had always pictured as before A New Hope. Ultimately it turned out in a way that could be at a few different points in the timeline, but it seemed to really follow Disney’s lead and give the fan’s a deeper look into what makes the characters the people that we love.

In regards to the absence of the Millennium Falcon, that was truly story driven. Luckily we had some fantastic VFX artists willing to put time into this and if we wanted to, we could have had a little bit of the Falcon flying around, but it wasn’t needed for this story. We had thought about maybe having them fly off in it at the end but thought, “Wouldn’t it be funny if we gave a nod to Lando and Han’s battle for the Falcon?” It just seemed to even the last moment of the film give the character and story a little more fun value, and ultimately something the fans could enjoy and laugh at.

Stepping into the iconic role of Han Solo is no small endeavor and Jamie Costa does a fantastic job in the role. When Lucasfilm announced they were doing an official young Han Solo film, did you find yourselves freed by the fact that someone other than Harrison Ford would be playing the role, or was it more daunting now knowing that Mr. Costa would be compared to multiple performers in the years to come? What were were some particularly daunting or important aspects to preparing to put the Corellian scoundrel on screen?

Jadon: Definitely freeing. This project was actually inspired with how well a Han Solo parody audition video Jamie did a year ago was received online. After that, we didn’t think it our film would convince Disney to hire Jamie but we did think that fans would enjoy seeing Jamie Costa as Han Solo while they wait for the anthology film. Luckily the IndieGoGo campaign success gave us more faith, which only grew while we we were making it, and the positive response has made us feel that we made a good bet.

As for important aspects, the biggest thing for making Jamie a good Han was not over doing it. When I came on board, I was putting in some money and a lot of time and my biggest concern was that things like Han’s classic smirk could be used too often, so I asked Jamie and Keith and they instantly knew my concern and that it would feel cheap. We all agreed, this can’t just be impressions of Han, Jamie needed to, bluntly, be not just an impressionist but an actor and try to think about what Han would do in these new situations. He couldn’t just copy right out of previous films, he had to make new moments. I think he did and hope fans enjoy him.

Your antagonist, Gyorsho, is something fairly unique in the Star Wars canon. Similar to Lor San Tekka from The Force Awakens, he revieres the Force – but is not himself Force-Sensitive. Unlike Tekka, he is a devotee of the Dark Side. These kinds of subtle, yet familiar, expansions of the setting are part of what gives Star Wars its “lived in universe” feeling. Can you tell us a bit more about developing Gyorsho and a few of the new characters we’re introduced to in A Smuggler’s Trade? Also, is the a Darth Revan mask I see Gyorsho holding?

Jadon: That is Revan’s mask. That was my brother Zach’s idea actually. He was my assistant on this film and is a very knowledgeable Star Wars fan, so when he read the script he suggested that Revan’s mask be Gyorsho’s main relic and we both thought that having a moment of seeing Gyorsho with mask on would be cool. I pitched to Keith and Jamie and they were totally game. The mask was a custom build by Raptor House Effects and it went as a gift to my brother after production.

For Gyorsho, Nathaniel wrote me this, “My original concept was for him to be monstrous and immobile (similar to Jabba), and have his little minions do all the physical work. But somewhere in the process (probably when you secured the legendary Doug Jones for the role), he became a powerfully active antagonist.”

In perfect Star Wars style, A Smuggler’s Trade ends with Han and Chewie walking off into the sunset. But clearly they’ve got more adventures to attend to. Given the overwhelmingly positive response to the film, any hopes that we’ll see Jamie Costa don the black vest and slow-slung blaster in the future?

Jadon: It’s possible, but we think better to actually focus the same effort and quality standard into other worlds at this point. So, any Zelda fans out there? Because if so, Jamie Costa and Keith Allen may have something in store for you late this year… 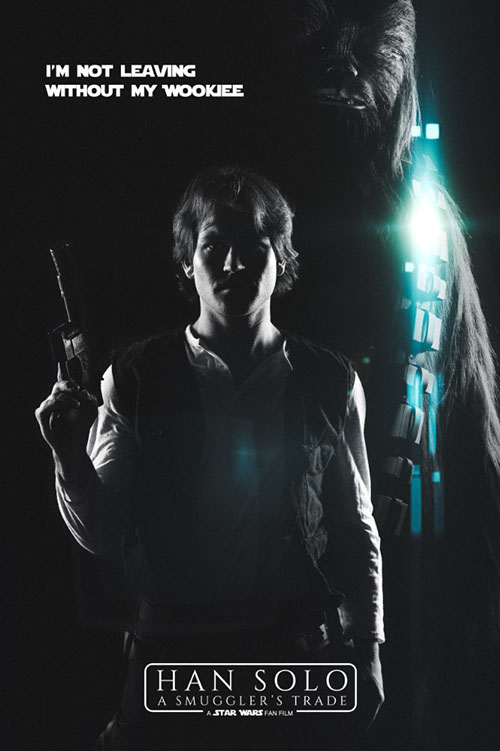