About a year ago, I found a toy Captain Rex Clone Trooper helmet at a thrift store for $8. It didn’t look realistic enough for display, but it was a bargain and I bought it. I am not a professional prop builder but I love to make things, usually Star Wars related. Most of the time I have no idea what I’m doing, but more often than not it works out. In the past I have made a few Jedi costumes, some lightsaber hilts, and a Sullustan flight cap but had zero experience with armor. This project was totally new for me and a bit outside my comfort zone. That being said, this is not so much of a how to article, but a overview of how I turned a cool toy into a respectable display prop. Maybe even inspire you to do the same! 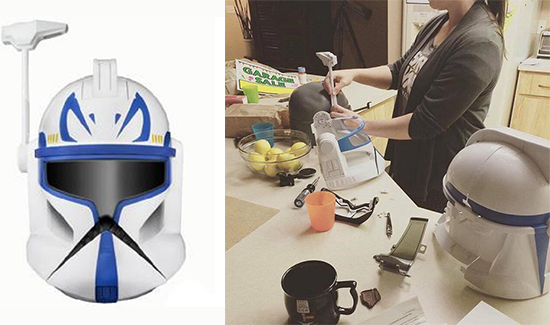 Because it is really a kid’s toy helmet, it’s designed for maximum visibility by the wearer. This makes the shape of the visor a bit over-sized and cartoon-ish. The hardest part about this project was reshaping the visor to look more screen accurate. Using a stiff plastic garage sale sign from the dollar store, templates I found HERE, and some super glue, I was able to get the front piece of the helmet to look like this. 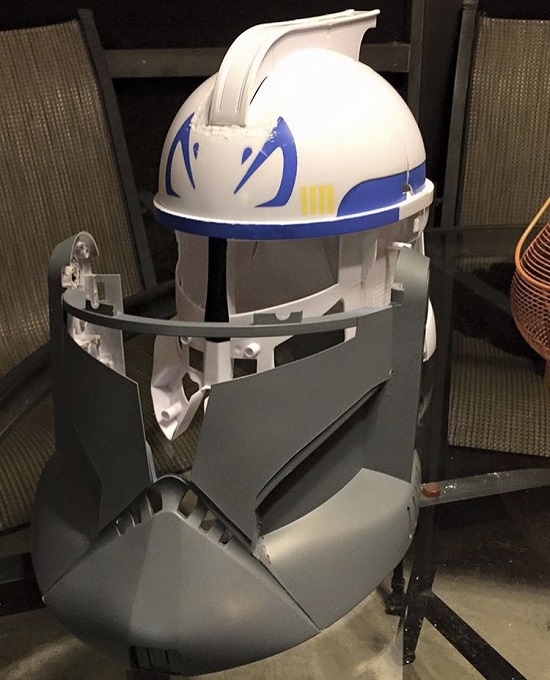 I sprayed the entire helmet with primer because the starting surface is pretty shiny and I had no idea if anything would stick. Wanting it to be a little sturdier, I took out the electronic parts (the voice changer wasn’t very effective anyway) and used a soldering iron (but no actual solder) to plastic weld along the inside of the helmet where the two main pieces meet. By separating the face piece from the two main pieces, you can remove the tinted eye visor piece so that it doesn’t interfere with painting. Then I used a thin layer of regular automotive Bondo along all of the seams and the template pieces. Once that dries, sanding and then more Bondo and more sanding and more Bondo and more…you get the idea. 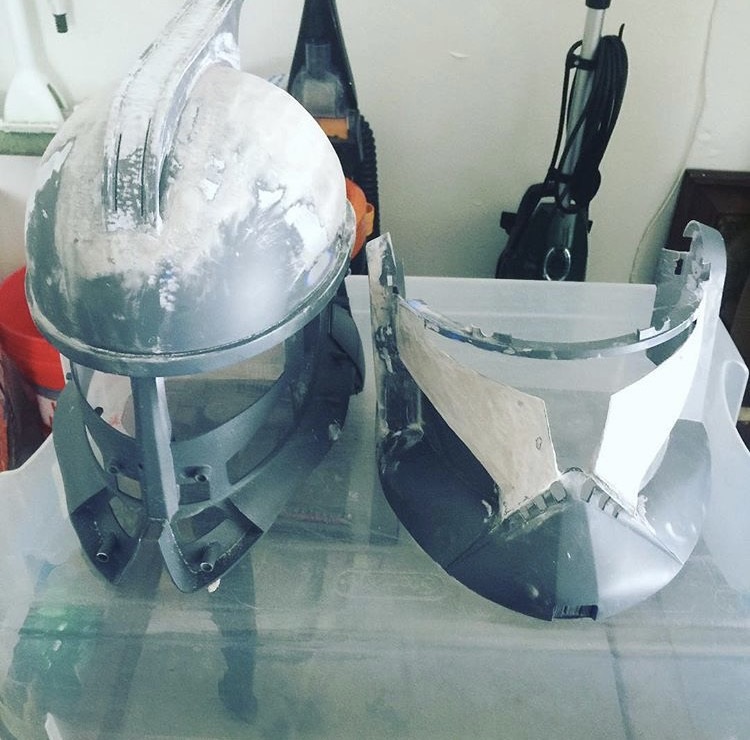 The next step involved me putting the helmet on a shelf and not looking at it for a few months, because seriously, so much sanding. Eventually all the pieces went back together. I reused some of the original screws and used superglue for the parts that needed a little extra help. At this point I decided to paint the whole thing white using a spray paint with built in primer, but in hindsight might have left the pieces apart for the first coat to make it easier. 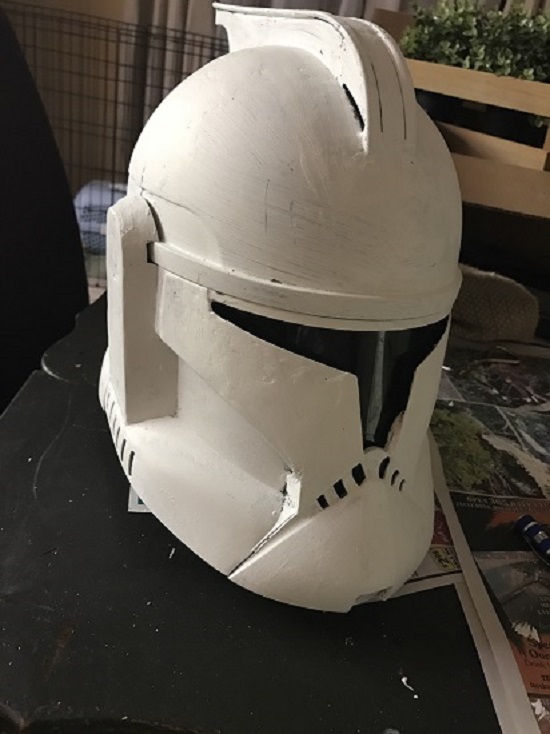 Then I used a dry brush and some black acrylic paint to go all along the recessed parts. Kind of like wear blaster residue would build up to give it a more “actually used” type of look and it helps add dimension. 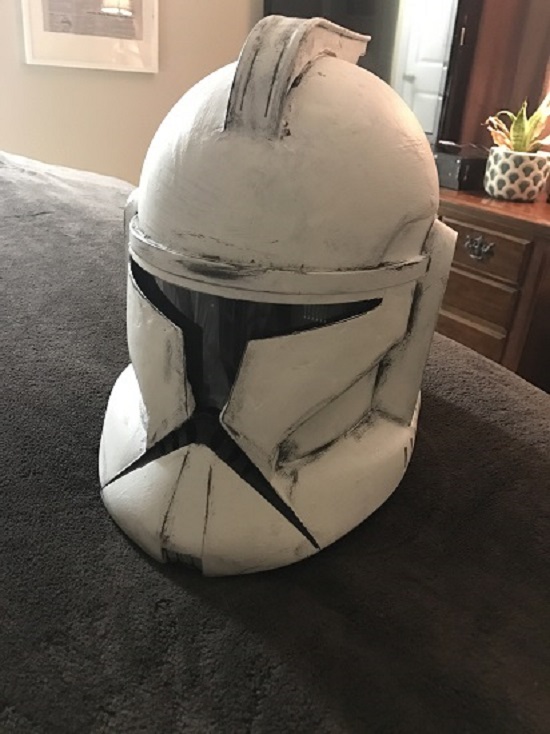 Biggest piece of advice I have to offer on a project like this, don’t be afraid of battle damage. Sanding didn’t turn out quite right? Battle damage. Paint get messed up? Battle damage. Basically a life saver on this type of project. I used a silver acrylic paint for the parts where the paint had been “worn away” and along all of the edges.Once I decided the extent of the damage I wanted, it was time to personalize. There are a ton of coloring variations that can be used on clone helmets and I considered bringing it back to a Captain Rex type coloration. In the end, I decided to do something a bit different and give my new helmet using a dark red center stripe. 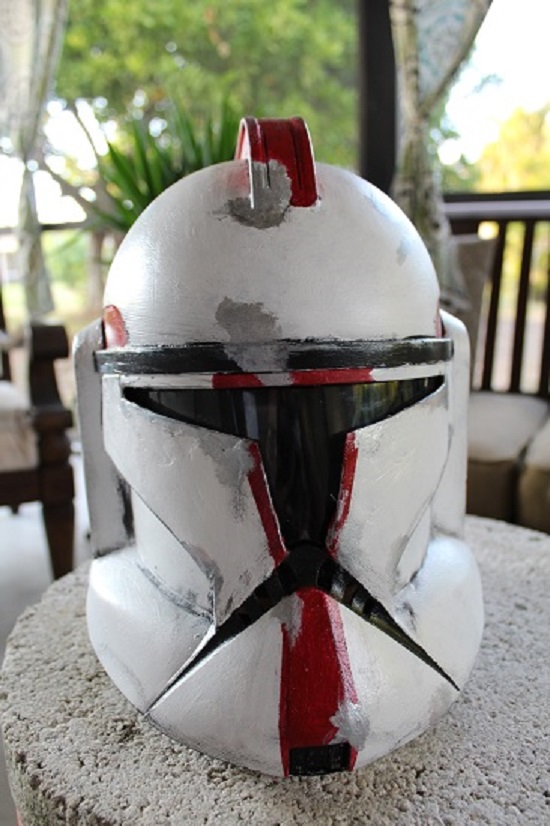 Overall this project was inexpensive and fun. Next time you see a bargain on a toy helmet, give it a try. The internet is full of helpful forums for prop building. Go convert yourself an awesome Star Wars prop display!

Have YOU created your own Star Wars themed cosplay items? If so, SHARE with us in the comments! 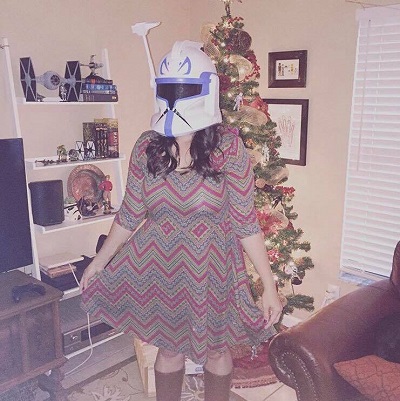