As a star in a very protected movie franchise such as Star Wars, it can be very stressful to actors that are held to an almost impossible high standard of secrecy. This pressure is only amplified by the numerous social media platforms that are available to the world with only a click of the keyboard.

In a recent Tweet, John Boyega is the latest celebrity that has fallen into the trap of “misunderstanding”. The misunderstanding comes in the form of people assuming that ALL tweets from Boyega must be related to Star Wars.

Does this mean that Finn re-joins the First Order, some implied? Does Finn go “bad”? Of course, the “Twitterverse” theories were wrong about his Tweet. You could almost feel the “facepalm” in Boyega’s next tweet!

Since The Force Awakens, Boyega has been busy in Hollywood with many projects which includes starring in the sequel to Guillermo del Toro‘s summer blockbuster movie, Pacific Rim: Uprising. With all the work being sent his way, it is unreasonable to think that all his tweets are regarding Star Wars. Right?

Seeing a chance to have a little bit of fun with Boyega’s Twitter (non) controversy, Mark Hamill swoops in to “troll” the situation of his friend and Star Wars co-star. And together, Hamill and Boyega, have a hilarious exchange! 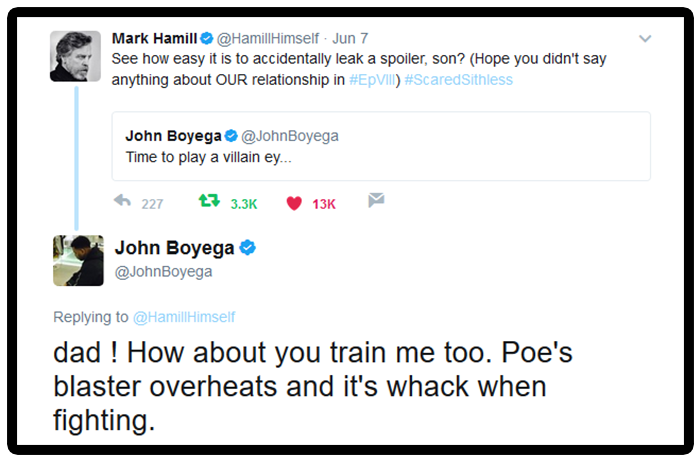 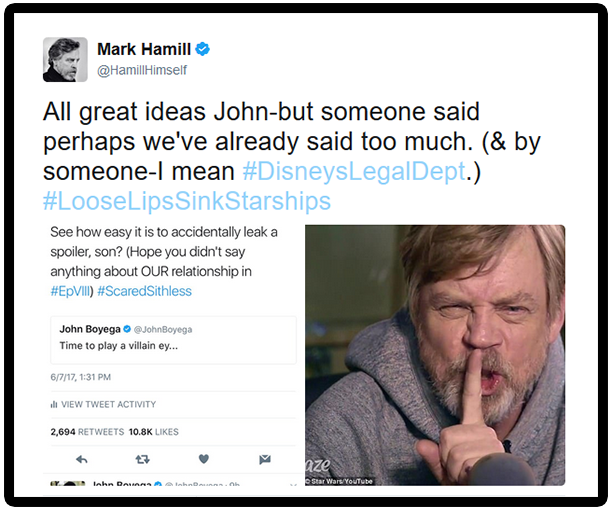 Mark Hamill, who plays Luke Skywalker in the films, is familiar with the fierceness of the franchise’s non-disclosure agreement (NDA) expectations. In a 2004 interview with Sound and Vision, Hamill recalls the talk he had with The Empire Strikes Back Directer Irvin Kershner about keeping the secret that Darth Vader was Luke Skywalker’s Father,

Who better to understand the pressures than Mark Hamill? These NDA pressures continue even today with his involvement in the new Star Wars films.

In an interview with Vanity Fair, Adam Driver discusses just how careful he has learned to be with his wording with fans and media regarding his role as Kylo Ren in the upcoming Star Wars: Episode VIII. In September of this year, Driver was quoted in Collider comparing Episode VIII to The Empire Strikes Back but that it “has a different tone” – a statement he denies saying.

“No, no, and that’s not even what I said. What I said was the tone of it was different, I didn’t say that it was gonna be in the vein of it. I was using it as an example, so poor example,“ said Driver, ”Next time I should say—I’m trying to think of another sequel to a movie that’s good. When I read the script, it was not what I expected, in the best of ways.”

It is sometimes understandable that fans and the media become so excited for a film that they will crave spoilers and interpret a quote differently from from what a cast member might have intended. This creates needless drama for both fans and the celebrities they affect. Say it with me – “NO SPOILERS!”

Let’s remember this… As a wise “JEDI” once said, #WaitFor8 #LooseLipsSinkStarships . 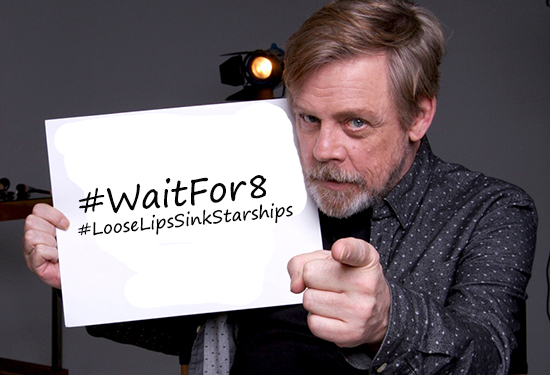