Shelby Young is an American actress with an extensive career in television, video games and film including Days of Our Lives, American Horror Story: Murder House, and the Oscar winning, The Social Network.

Star Wars Reporter is loving the series and wanted to learn more about the series, the story and the actor playing the role of “fandom’s first princess of sci-fi” and were thrilled when we were able to talk with actress Shelby Young.

What can you tell us about the new series, Star Wars Forces of Destiny? What kind of character developments and stories are we going to see that haven’t already been shown?

Shelby: Star Wars Forces of Destiny is a micro-series showcasing small moments and every day choices that helped shape who some of our favorite characters are. It’s a short glimpse into what some of our heroes were up to outside of the films and TV series.

With the release of the series, what has the response from the fans? Are you surprised at the amount of attention and excitement that Forces of Destiny has generated?

Shelby: Oh I’ve been getting the sweetest messages and tweets, (and stalking the #ForcesofDestiny tag a lil’ bit), seeing wonderful posts and photos of parents sharing this series with their kids! It’s so exciting for me to know that Forces of Destiny will be some children’s first foray into that great big galaxy far, far away. I’m so appreciative of the attention and excitement for this show!

As a voice actor, how do you prepare when taking on an iconic role such as Princess Leia? How does it feel to forever be a part of Star Wars history as the voice of Princess Leia?

Shelby: I re-watched the original trilogy so many times, which is some of the best homework you could have! I also frequently look up specific clips on Youtube to listen and speak along with Leia, I can quote almost every one of her lines, especially in A New Hope. Dave Filoni actually gave me some great advice, to watch other films with strong female leads and anytime a line or speech popped out at me to recite that line out loud as if Leia was saying it. For me, it’s really about capturing her strength more than anything.

It feels so incredible to be a part of the Star Wars universe and I am so grateful for this experience. Seriously, when I found out I booked this role the first thing I did was call my mom and cry out of excitement! [laughs]

Star Wars has a very devout and outspoken fan base. Are you worried about what they will think of your work and the series? With the recent passing, are you intimidated in playing the role made famous by Carrie Fisher?

Shelby: The fan response has really been amazing! Every fan I’ve interacted with thus far has just been so supportive. I’m so thankful to them!

Carrie Fisher is Leia and always will be. No one can ever replace her. For me, it’s an honor to follow in her footsteps and help tell a few of Leia’s smaller stories in Forces of Destiny. My hope is that FoD will introduce Leia to a new generation of fans who can be inspired by her like we were and still are. 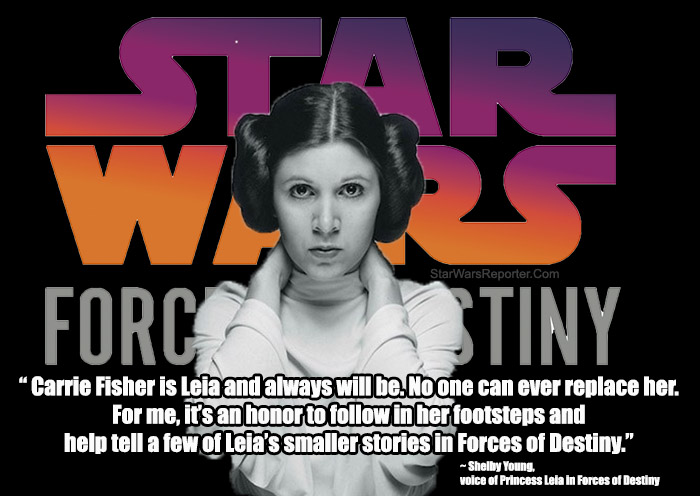 Shelby: I’m excited for your daughters to watch the series too! I’m so thrilled that we’re in a time period where strong women are being celebrated and shown on screen more frequently. Young girls need to know that they can be just as tough, smart, and witty as the boys. Growing up with powerful women as role models can really shape a child’s outlook on their own self-worth, how they handle the world and how they treat others. That’s why I love Forces of Destiny. It follows these strong, female character and shows that heroism can happen even in the smallest of moments.

What was your first experience with the Star Wars saga?

Shelby: My older step-brother is one of the biggest Star Wars fans I know! So before I had even seen the films I feel like I knew all about Princess Leia and Darth Vader and we would play pretend. He was always Vader or a Storm Trooper – sorry Chris!. But this is funny, I was performing voice/motion capture for a video game back in 2011 and one of the members of the creative team found out I had never actually sat down and watched all of the Star Wars films and they started teasing me, refusing to call me by my name instead saying things like, “Oh would your Worshipfulness like to come to set?” or “We’re ready for you, Princess!”. They promised to stop and actually start referring to me as Shelby again if I would just watch A New Hope over our holiday break. Well, obviously once I sat down for A New Hope I couldn’t stop and then I binged the rest of the original trilogy, and then the prequels, and then started Star Wars Rebels and I’ve been a devoted fan ever since.

What was it like working with Dave Filoni and the animation team? Were any instructions given to you for your role as Princess Leia or were you given some freedoms with the character.

Shelby: So amazing! We had so much fun in my sessions, nerding out together and making obscure Star Wars, Doctor Who and Jurassic Park references. I seriously had to pinch myself knowing the creative geniuses I was working with and seeing how down to earth and kind they were to be like – “… Is this real life right now?!”. I also know it was very important to the creative team, Carrie Beck, Brad Rau, Jennifer Muro (and of course), Dave Filoni, to be true to the amazing character that Carrie Fisher created.

I love entertaining people but can be shy at times. Because of this, I have always loved the idea of voice acting. The ability to use your creative acting ability but not in front of a camera or on stage. That being said, what are some of the differences and benefits of voice acting to that of on screen?

Shelby: Some of the main differences are the ability to play roles you would never be able to physically. So far I’ve been Barbie, a babydoll, a little boy, a Smurf, a Princess/Senator, and more! And obviously make-up can work wonders but there’s only so much it can do. Voice acting is definitely a more free medium in the sense of not worrying about your lighting or how you look, but it comes with it’s own set of challenges as well. Taking care of your voice has to become a priority, which of course your voice matters on screen too, but your voice is EVERYTHING when you’re behind the mic.

Shelby: Of course, I would love to lend my voice to Leia for the rest of my life, but honestly I’m just so honored to have the chance to voice her at all. It really is a dream come true. Who knows what the future holds!

What advise can you give those aspiring to get into voice acting?

Shelby: Voice acting isn’t just about the ability to make a funny voice, voice acting is first and foremost acting. Even over the top cartoon characters have their own truth’s and the voices are then born from that. I recommend taking classes to everyone I meet. I know practicing and learning has helped me immensely. And don’t be afraid to look silly in the recording booth, because trust me, you will and that’s part of the fun of it!

Watch the latest episode of Forces of Destiny on the Star Wars Youtube page.