But it is her recent project with Lucasfilm that has the Star Wars community excited. That project is the animated, Star Wars Forces of Destiny. With this solid resume of shows to her credit and her unique writing perspective, Muro has become one of the industry’s top female writers.

Star Wars Reporter was able to connect with Ms. Muro for an interview to discuss the new Star Wars series, animation and the industry’s influence at large.

What can you tell us about Forces of Destiny and the stories we are going to see?

JM: Forces of Destiny is about the every day acts of heroism from some of the most iconic female Star Wars characters. Leia, Rey, Jyn, Sabine, Ahsoka, and even characters like Hera and Ketsu. Themes of friendship, having each other’s backs, making a difference, even in small ways, and what it means to be a hero are some of the things we explore with these characters. We will be seeing previously unseen moments from some famous time periods in Star Wars history.

What are your thoughts on the overwhelmingly positive response from fans? Were you worried before the series premiered about how fans would receive the show?

JM: I’m very glad the response has been overwhelmingly positive. I was super curious how people would feel about us hitting the right notes or getting the tone. But it seems to be working. I was hoping they understood what we were trying to accomplish, and for what audience, and to enjoy it for what it was no matter your age.

Forces of Destiny has been criticized by some as being female character dominated. In a video at the Saturn Awards posted by Legion of Leia’s, Anastasia Washington , when asked about this you had stated that there are male Star Wars characters coming. What would you say to those people who same people if there were not any male characters involved in Forces of Destiny? Is a female dominated series bad or was it finally time? (https://www.youtube.com/watch?v=MKmOQ89Xq_s)

JM: I think no male characters being in a show is not something Lucasfilm necessarily would need to go for, so it’s not a scenario I think too much about. To me, from what I personally experienced, Lucasfilm as a company and a culture feels like a very balanced place. Forces of Destiny specifically is female dominated, but it’s about a rounded supporting cast as well. I would also say that I think it is indeed time for a project like this, but remember, it is a sliver of the Star Wars universe and plenty of room for all different types of stories to be told. This is just one of them and a nice perspective change.

JM: I think it’s very important to inspire girls not only with strong female characters, but hopefully be inspired to write their own stories someday, or even write for Star Wars themselves. If I can do it they can do it! And, to me, it is absolutely vital for boys to see strong female characters. Male characters have been told for many years that they are strong and capable it would be nice for women to be seen by them on that equal footing. Eventually, it will become a norm for both boys and girls to be seen in a strong, positive light.

Animation has become a strong story telling medium in the past decade, with Star Wars leading the way with titles such as Clone Wars, and Star Wars Rebels and more. Do you feel that story-telling in animation has grown in popularity and importance to the canon of Star Wars?

JM: Star Wars animation has been important for quite some time and I don’t think it’s going away anytime soon. It’s a medium that is beautiful, malleable and you can do a lot of things that might very well be cost prohibitive other wise. Although, it is getting much more reasonable each year that passes in terms of special-effects and live action. We also have an amazing voice over community that brings such heart and soul to Star Wars characters. Characters like Ahsoka have existed only in the animation space as of right now, and look how much that has contributed to canon. I’d like to see Star Wars animation go on for a very long time!

You spoke recently at the Disney Animation, “Women in Animation” talk. What kind of presence do women have in the animation industry? What can be done to improve this including management and lead roles?

JM: I think the presence of women in animation has been around for a while but it is indeed getting more and more each year. And I’m super glad of that. Especially in writing and directing. In development and executive roles, it has been alive and flourishing since I’ve been in the business. But it would nice to see some more rounding out in the other areas. I think the more that women try out for those jobs the more, once again, it will become the norm.

What was the process of coming up with the stories in Forces of Destiny? What guidelines for the sake of continuity and canon were taken? What freedom did you have?

JM: Coming up with stories for Forces of Destiny was a joint effort with Lucasfilm Story Group in figuring out what the stories were, what kind of connected or unconnected pieces we wanted to tell, how long, etc. It was a fairly smooth process even while learning along the way. It was a really positive experience. In terms of continuity and canon, I think just making sure we knew what part of history we wanted to tell stories in, making sure we had all of our ducks in a row, is all we really needed to make sure things were okay. I had a decent amount of freedom in term of what stories to tell. It was super collaborative and I am grateful for it.

JM: My favorite character to write for had to be Leia. It’s a dream come true. Unfortunately, I didn’t get to work with Carrie, that would’ve been absolutely amazing. But Shelby Young did a wonderful job and I’m so happy Leia’s stories came to life like they did. Writing those previously unseen moments was mind blowing in places like Return of the Jedi and right before Empire Strikes Back. I would love the opportunity to write for Luke Skywalker in the future. He’s my favorite character in Star Wars and that would be pretty darn incredible. Here’s hoping that can happen someday.

What would you tell those young girls and women looking to get into the animation industry? What advise can you give to direct them to the path of success?

JM: I would say to them, don’t give up. It’s absolutely possible, now more than ever. I have seen the changes myself over the years and it is not going in a worse direction it is actually getting better. Read scripts, write original samples, network, and, like I said, don’t give up. Even if you’re afraid. As long as you have persistence, you can still get there.

What Star Wars project can we expect to see you working on next?

JM: I’ll be happy to do anything Lucasfilm wants me to do in ANY part of their universe!

Thank you to Jennifer Muro for her time in this interview and we look forward to her future projects! May the Force be with you! 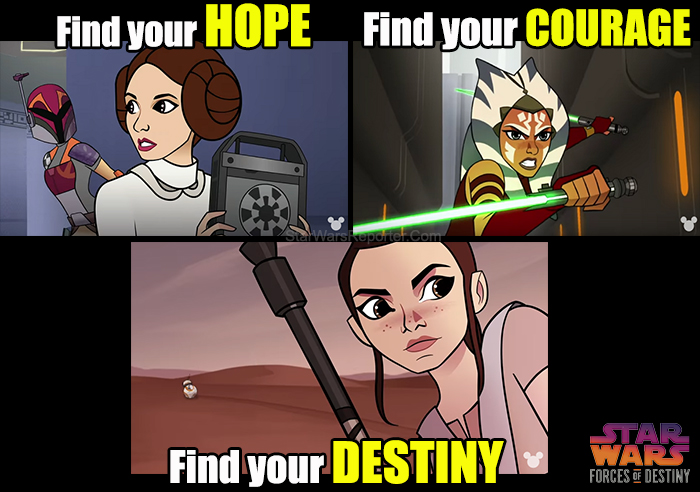 Watch Star Wars Forces of Destiny on the Disney Channel or watch the series on the Star Wars Youtube page.