With the excitement of The Last Jedi releasing only weeks away, Disney has dropped some huge news regarding their plans for the future of the Star Wars franchise.

Disney Executives have announced the plan for a new Star Wars trilogy which will be led by The Last Jedi Director, Rian Johnson,

“We all loved working with Rian on The Last Jedi,” said Lucasfilm President Kathleen Kennedy, “He’s a creative force, and watching him craft The Last Jedi from start to finish was one of the great joys of my career. Rian will do amazing things with the blank canvas of this new trilogy.”

Johnson will write and direct the first film in the new trilogy and will focus on a new set of characters that explore new stories from the Star Wars universe.

I really like this idea. The additions of Rogue One and Star Wars Rebels have proven that featuring stories not involving the familiar icons of Luke, Han and Leia, when done right, can be a huge success for the saga and loved by fans. I would even love to see these films go further and feature archetypes we have yet to see, including not having an Jedi character – at all.

In the past, Lucasfilm had stated that they had wanted to move the Star Wars story in to new territory that didn’t involve the “Skywalker family”. I had thought that this meant that they had intended to do this with the addition of episodes 7-9, which would include “killing” off Luke during the series. With the announcement of this NEW trilogy, it may look like my dream that Luke will, again, ride off into the sunset in a happy victory…I hope.

The excitement didn’t stop there as Disney also announce their plan for a LIVE ACTION series that will be featured on their upcoming streaming service that is set to launch in 2019. While Star Wars has produced several successful animated Star Wars series, this will be their first live action attempt.

There are some that have jokingly pointing out that a live action project was already created in the form of the infamous 1970’s Star Wars Holiday Special, but this isn’t the same. With the creative talent and resources we have seen Disney invest in the franchise so far, we can be certain that we won’t be seeing any song and dance scenes or quirky guest cameos in the new Disney series… I hope. 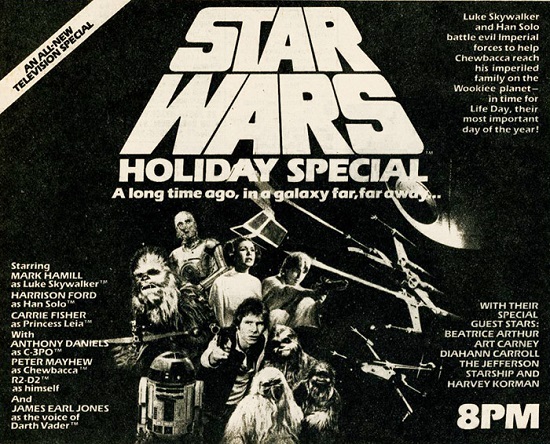 What do YOU think about the announcements? Are you excited like we are? Let us know in the comments!