In our ongoing goal of NOT posting reviews or spoilers for Star Wars: The Last Jedi, we are instead reviewing a Star Wars fan film created by The Forge Studios. The film is Star Wars: Extraction.

“Desperate to gain an advantage against the forces of the Empire. The Rebel Alliance sends in a team to find the location of the Empire’s secret base. A single pilot managed to get away, he may hold the fate of the Rebellion in his hands.”

The film was submitted for the official 2016 Star Wars film competition and is set between the time of Return of the Jedi and The Force Awakens.

We connected with the Director, Ron Newcomb, who agreed to talk to us about his film and the process of its creation. 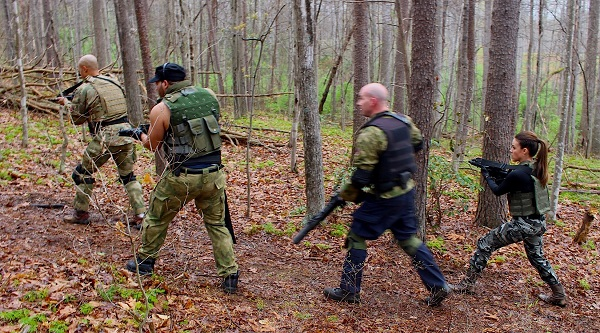 RN: I love the idea of PJ’s (US Air Force Pararescue) spec op teams. Early on as a kid, I always wondered what happened to downed Rebel pilots, would someone come for them? We saw Luke go down in Empire, and though it was part of his destiny, would someone have come for him?

I wanted to see the Rebels protecting their own and coming for a pilot no matter the cost. We live in an interesting time, where the Empire gets all the cool stuff. Well, what of the Rebels, do they have spec op teams out there operating? We know now they do, but at the time I was working on the idea, this was the initial thrust of the idea. Our hypothesis was “How would the Rebels recover a pilot?” 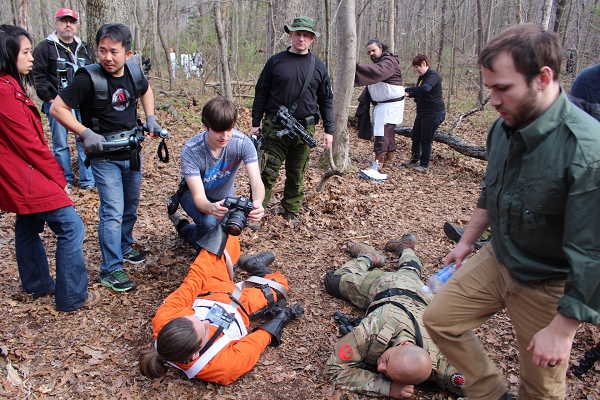 J.J. Abrams had said in interviews that he was terrified of Star Wars fans seeing The Force Awakens, as he didn’t want to disappoint such a dedicated fan base. Did you have similar fears at “doing a good job” for the fans?

RN: I believe I have a different fear than J.J.. As an indie filmmaker, you only need to put something out on YouTube to be destroyed by the “criticals” (everyone’s a critic, but I believe we’ve created a culture of criticals). J.J. has proven himself and if people did not like it, it would likely be the story, not the visuals. It would only be a small bump in the road for him.

I however worry about every aspect of things. Will people like the story? Can we pull it off from a CGI perspective and practicals? Will this get out to the masses so that we can gather a tribe of fans to do more projects?

Creating film is a scary thing. There’s always a significant cost financially and time, and then film is subjective. The question is, will this story resonate with people. You can only do what you can, and send it out into the world to be embraced (or not) by people.

Films are not meant to be read, but seen. Do we take allow people a small escape from their daily lives? Do we take them on an emotional ride? I hope so. 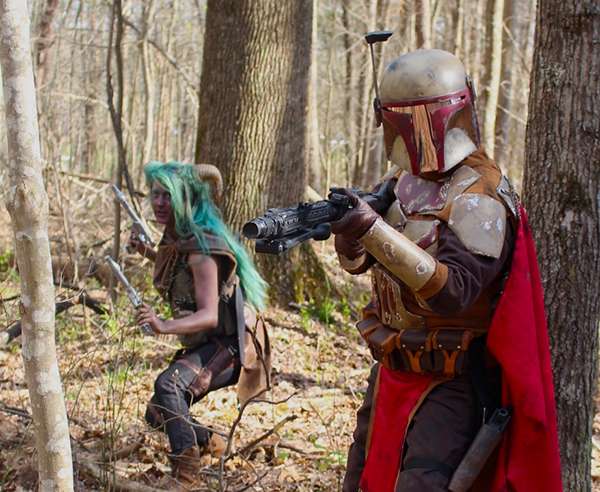 You have created several fantasy themed films in the past. Are there differences and challenges with the sci-fi genre when creating a film?

RN: Fantasy & Sci-Fi are different sides of the same coin; in making them and in fandom. Most fantasy fans enjoy sci-fi and vice-versa. I know, because I am one. We love to be taken on a journey. The scopes are usually epic, which I enjoy.

Creating Fantasy & Sci-Fi do present certain challenges, primarily in the cost of wardrobe, props, locations and then CGI. Sci-Fi tends to lend itself more on the CGI side of things, which makes the timeline longer in getting it done after you film. Any extension of this timeline increases the likelihood it won’t finish, as most films wipe out in post-production.

Every film I’ve ever done (short or feature) has been a challenge. It’s up to the filmmaker to pull it into existence. 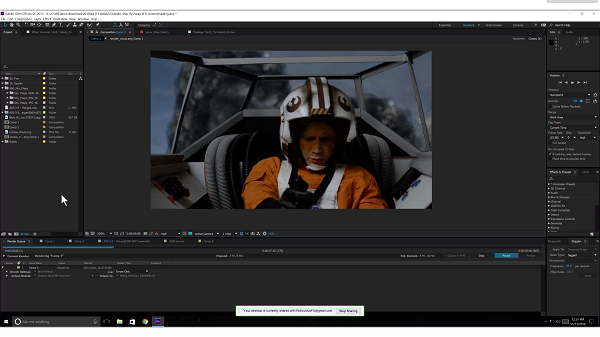 With the easy access to CGI special effects, has it made it easier for independent film makers in creating their work, especially with the high standards that fans seem to hold?

RN: It’s never easy and CGI artist are not a dime a dozen either. We were fortunate enough to bring on some early on and develop strong relationships with. A young filmmaker, Aaron Rosene, did many of our effects along with a team of others willing to contribute. I’m proud of the team for doing this and seeing it through.

It is true however, that what only the studios once could do, now we can as well. CGI takes a long time to make happen. It can wipe projects out by not filming them right or having enough assistance in post-production to complete. A CGI artist can feel like they are on an island and it’s hard to see progress as CGI is do a little and then see what it looks like.

CGI is always developing and becoming more and more equal for filmmakers. 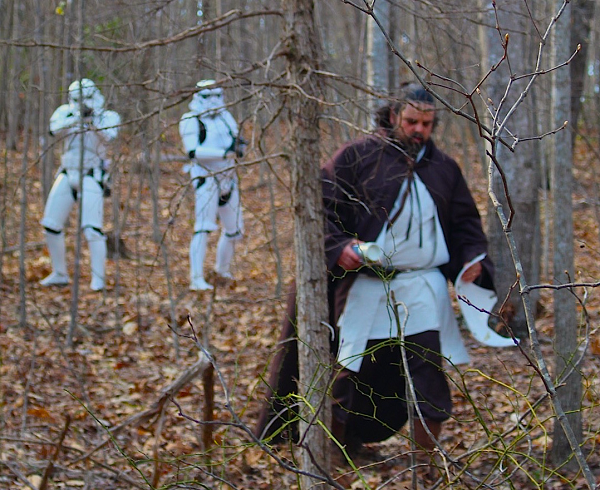 The 501st Legion seem to be a contributing factor with independent films like yours as we see them starring in many films such as yours. How important and helpful has the 501st been to your work and other film makers?

RN: I believe everyone that dresses up and does cosplay, love the idea of doing that for a film. A film immortalizes you. These guys and gals are not just fans, but take on a persona that they bring to life. We just invited them into the creative process to capture them in this persona. For instance, the stormtroopers all had certain names that we kept, as for our film it was them.

Filmmaking is collaborative. I love this. It’s always a WE, never an I. The 501st, and I would add the Mandalorian Mercs, were vital to the legitimacy of our project. It takes a small idea and gives it that epic look and feel. It’s always hard to figure out how to get a hold of a group, but once we get a hold of the right person, they were awesome. Very welcoming and helpful. The Tyson family (the Mercs) were so epic we’ve worked with them on a few projects now. 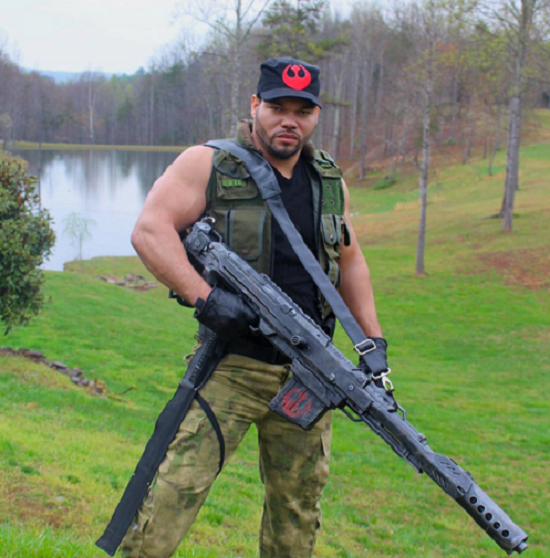 I am a fan of X-Wing pilots, with Luke Skywalker being my favorite but I have always wanted to see more films with a more dominant presence of ground support troops. We were able to see this in Rogue One. In the Star Wars films, the Rebel Soldiers don’t feel that effective as their pilot counterparts. Was that your intention with this film?

RN: It’s funny, when we first started to bring this story to life, this was way before Rogue One and us even knowing what that story was. After seeing the trailer, we thought, “man, I guess our idea is a good one”, as there are many similarities.

Yes, we wanted to see that the Rebels are no joke and have special operators that can kick butt and take names. They also take care of their own and have thought through things like getting a pilot out of harms way with an extraction. We wanted to bring in other units other than just flying. They certainly have women and men that are like their Marines (I am a former one myself). I wanted to see that team.

I think that’s partly why we liked seeing Empire Strikes Back. Troops standing up against an invasion and gave their lives to that others can get away. And when they took down an At-At we all cheered. They made a stand against the darkness together to give their lives for the light.
I love seeing the expanse and epicenes of the Star Wars universe. 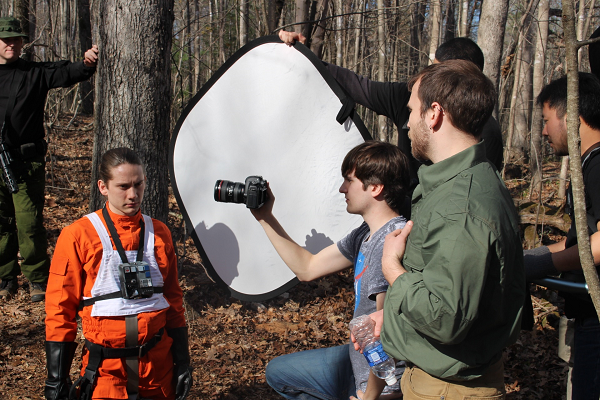 Do you have plans for future Star Wars themed films?

RN: From what I understand, Lucas has always been a supporter of fans doing short “fan films”. When Disney took it over, we were all wondering if this was going to halt. For a year, they did not allow fan films, but then very wisely reinstated the Star Wars Fan Film competition. They didn’t have to and it’s very cool (and wise) of them to allow us fans to dream in the worlds Lucas, and others, birthed.

I love the idea of the fan film competition, but any film is a big undertaking. I am working on some of my own projects, but we’ll see. If someone has the right script, let me know! 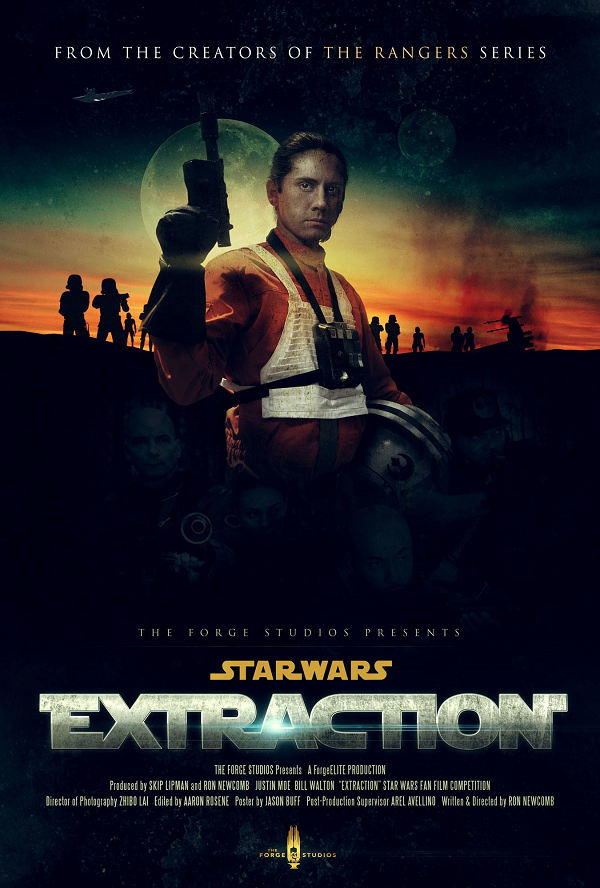