The nominations for the 90th Oscar Awards has just been released and Star Wars: The Last Jedi is among the nominees.

Congratulations to the nominees!

Noticeably missing in the nominations for Best Actor was Mark Hamill. Fans had hoped that the Academy would recognize the brilliant performance of Hamill in the role of Luke Skywalker in the recent Star Wars film. Even director, J.J. Abrams, who worked with Mark in The Force Awakens, believed he should have been nominated when giving a speech at the Oscar Wilde Awards,

“I think we are all going to be very upset if he does not win an Oscar, and no one more upset than Mark,” said Abrams, “He is hysterically funny. He has done comedy. He is an amazing guy — he can do anything.” 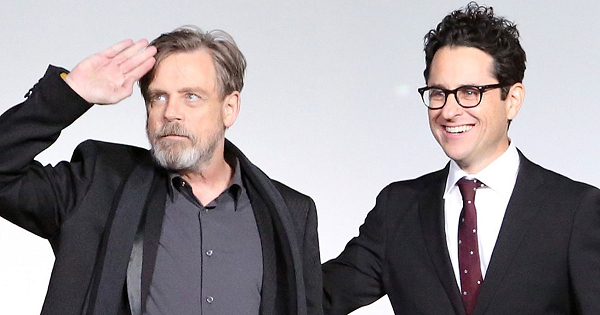 Further to that, with the overwhelming positive feedback from critics, you would think that the The Last Jedi would be recognized for more than visuals and music. What about Rian Johnson for Best Director and Best Writer in creating a unique new path for the Star Wars sagas? A path that has freed up the future and expanded the canon with more ideas. What about Best Supporting Actor for Adam Driver for his portrayal of Kylo Ren? Driver not only gave us a fiercely intimidating villain but also gave the fallen Padawan a feeling of depth to a point, you can almost empathize with his struggle. I can go on about all the things that the Academy “missed” but I’ll let the positive response from fans and the growing box office numbers speak more to that.

Regardless of the Academy’s oversights, we wish The Last Jedi nominees a WIN in their categories and thank you for a great movie experience! 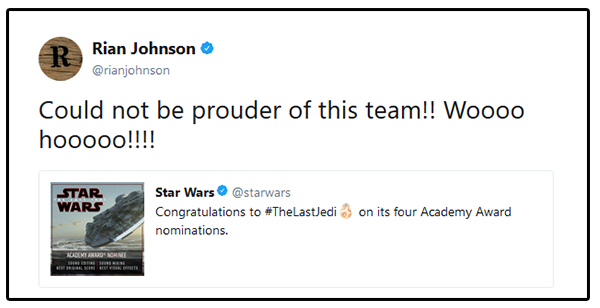 The 90th Oscars will be held on March 4th and hosted by Jimmy Kimmel. For more details, visit http://oscar.go.com/