It has just been announced on the official site for the St. Patrick’s Festival that Mark Hamill will be returning to Ireland to be the honored guest.

“The role of International Guest of Honour is something we have been considering for a few years”, said Susan Kirby, festival CEO, “There are so many examples of Irish people and the diaspora achieving eminence across many different art forms and disciplines worldwide. Many of these have a special connection with Ireland and we want to celebrate and recognise this. Mark has a special affinity to Ireland through his filming of Star Wars and family history and has done much for our film industry. We’re looking forward to welcoming him back ‘home’ to celebrate our national holiday and St. Patrick’s Festival with us.”

The annual festival is in celebration of the national holiday attracting thousands. The festival hosts a number of local performers including musicians, dancers, storytellers and more! This is the FIRST year that am international “Guest of Honor” has been named and who better than Luke Skywalker himself, Mark Hamill! 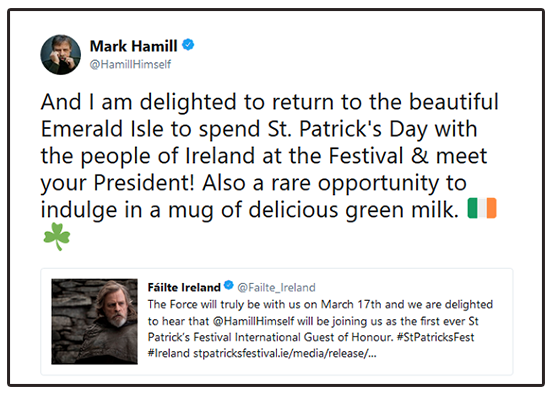 Hamill made a huge impact on the Irish community of Kerry during the filming of Star Wars: The Force Awakens as Skellig Michael Island became the location of the “Jedi Temple” and the hiding place of Luke Skywalker. 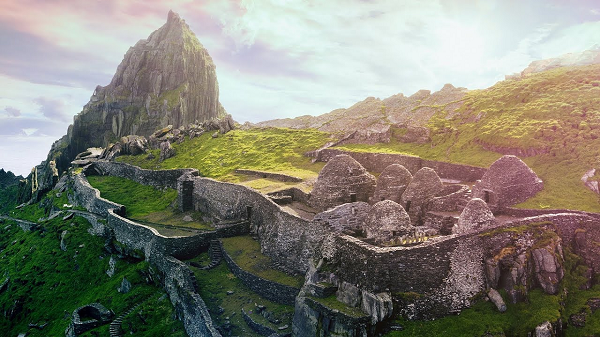 “Since filming Star Wars: The Force Awakens in County Kerry, Mark has been a great ambassador for Ireland and it is amazing to have someone of such universal – even galactic – acclaim in this new honorary role”,said Fáilte Ireland’s Head of Festivals, Ciara Sugrue,”Fáilte Ireland continues to invest significantly in the St. Patrick’s Festival, an event which not only attracts tens of thousands of international visitors but also showcases Ireland as a fantastic tourist destination to global media. With this year’s special guest, we will have an extra bit of magic for this wonderful showcase for an Irish welcome.”

Maybe the “Honored Guest” duties will include pouring Irish beer with the skills Mark demonstrated at The Moorings Bar in County Kerry in 2015? And how would one order a drink from a Jedi Master? Maybe those lucky enough to attend the festival can find out?

To learn more about the festival, visit the official site: http://www.stpatricksfestival.ie/