Star Wars: Last Shot: A Han and Lando Novel continues the grand tradition of film tie-in novels released just before the associated film is about to hit theaters. In the new canon the strongest of these novels thus far has been Catalyst, the Rogue One prequel novel. Last Shot (by Daniel Jose Olden) isn’t quite as engaging as James Luceno’s Clancy-esque thriller, but its still worth a read.

Unlike other novels released since the reset of what was once known as the “Expanded Universe,” Last Shot is actually set across three different periods of galactic history. As mentioned in the novel’s subtitle, both Han and Lando are the story’s protagonists. Over a decade before the events of the original trilogy we have a story that focuses on Lando and his newly revealed droid sidekick L3-37. Three or so years later, we leap to Han and Chewie gallivanting across the galaxy. The central narrative, however, features both Han and Lando working together two years after the events of Return of the Jedi.

Together Han and Lando are tasked with solving the why the mysterious Fyzen Gor sent an assassin droid to kill Lando. The only clue they’re given is that the deadly robot was tasked with finding and murdering the registered owner of the Millennium Falcon. Lando believes the hit was intended for Han, while Han believes Lando got into the mess all on his own. Neither of them will be safe until they find out just who Fyzen Gor is and why he’s hunting the owner of the Falcon. 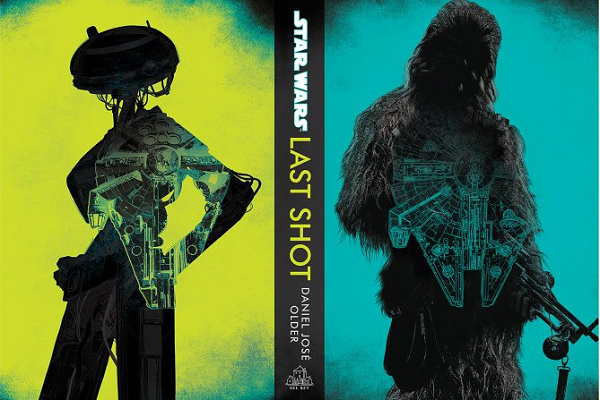 Though fun at times, Last Shot meanders a bit as it leaps between time periods. The author’s attempts to creating the building tension of a mystery story can often leave the reader confused as to what is going on and where the through-line of the book.  That’s not to say Last Shot doesn’t have its strong points. Han Solo as the father of two-year-old Ben Solo is a poignant portrait of a man lost in his role a father and husband. Solo’s trademark swagger and bravado is all but useless in the face of his savvy wife and the indomitable tyranny that can only be found in toddlers. It’s refreshing, honest, and truly sincere to new parents. Lando, by contrast, seems right at home as budding legitimate businessman who is building a commercial enterprise in all the right ways. This makes Solo’s doubts and struggles all the more real and offers sharp contrast to how each character has grown since the events of Return of the Jedi.

Last Shot also has a double-dose of over-the-top Star Wars fun. Peekpa, the Ewok computer hacker (yes, you read that right), is furry ball of pulpy silliness that injects the novel with a dose of brevity at all the right moments. Taka Jamareesa is introduced as a hot-shot young pilot with a taste for music the older generation just can’t grasp, but is revealed to be a character with surprising moments of emotional depth. Olden also draws heavily from Chuck Wendig’s woefully under-rated Aftermath Trilogy, connecting several characters to both Sinjir Rath Velus and Conder Kyl. This creates a bond of continuity that isn’t as strong in previous entries in the new post-Legends timeline that’s a welcome change of pace. Finally, and most refreshing of all, there is not a single meaningful mention of the Jedi, the Sith, or even The Force itself. Last Shot shows that not every tale in a galaxy far, far away has to be tied to the eternal cosmic conflict between Light and Dark. 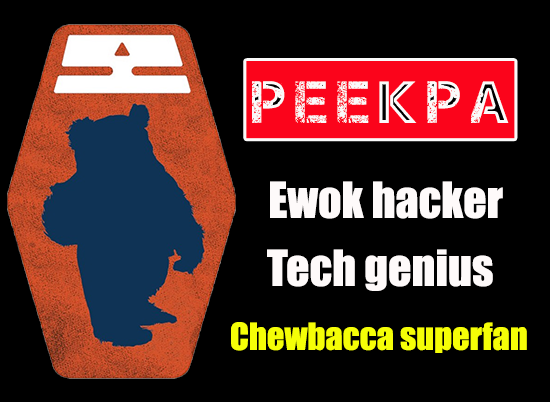 Still, like most Star Wars stories, the fate of the galaxy hangs in the balance. The sum of its flaws and strengths make Last Shot feel like a novel that came out of the Legends era of stories — but a strong entry from that time. It’s a fun, fast, pulpy read. Having not seen Solo: A Star Wars Story yet, the implied tie to the film feels a bit forced. That may change after seeing the film, but upon first reading it feels like Olden had a story he wanted to tell and that attaching it to Solo was an afterthought. This wouldn’t detract from the over all quality of the novel, except it feels so blatant.

Last Shot is a helluva a lot of fun and does service to both its central characters. In the end it’s a story where Lando is tasked with saving the galaxy and Han is forced to confront who he is and the consequences of the choices he has made. That alone makes it worth the price of admission, but unless you’re a die hard follower of the Star Wars canon I suspect little is lost by waiting until Last Shot hits paperback. 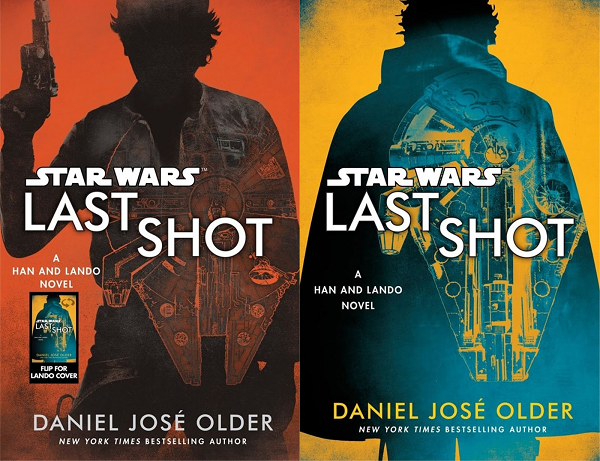