Since 1980 when Lando Calrissian was reminded reminded that he lost the Millennium Falcon “fair and square” to Han Solo, fans have wondered exactly what game these two scoundrels played with the fastest hunk of junk up for grabs. A decade later West End Games released a role-playing game adventure for the Star Wars Roleplaying Game entitled Crisis on Cloud City which featured full rules as well as a complete deck of Sabacc Cards. Since then Sabacc danced through the Star Wars galaxy, both in the current canon and the now-defunct Legends material. From that time onward, the mystique of both the game itself and the fated bet between Solo and Calrissian as been as part of Star Wars as Aunt Beru’s blue milk. Sabacc has appeared in countless books, novels, and even in an episode of Star Wars: Rebels alongside the Cloud City charmer himself.

As a tie-in to Solo: A Star Wars Story, Hasbro has published the Han Solo Card Game. While not officially billed as Sabacc, the game is designed to capture fast and loose gambling with the flair and style of a galaxy far, far away. Retailing for about twenty dollars, the Han Solo Card Game comes with a deck of 62 cards, twenty four bounty tokens, and a pair of six-sided dice with themed symbols on them as well as a four page rules sheet. 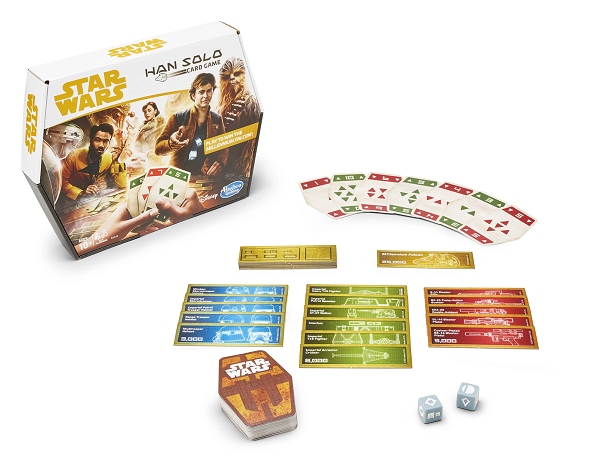 The cards are broken up into three suits: thirty positive numbered cards (green), thirty negative cards (red cards), and two blue cards valued at zero. The goal of the game is to construct a hand that adds to a zero sum, or as close to it as possible. Players may take the top card from the draw deck, take the top card from the discard pile, or simply take no action. The dealer, who is also playing, rolls the pair of dice. If they come up a matching pair, all players are dealt replacement cards equal to the number of cards currently in their hand. After three rounds of play in this fashion, the player with the closest zero sum is declared the winner and takes all tokens in pot. After all twenty four tokens from the pot have been allocated in this fashion the winner is determined by who has accumulated the most valuable collection of tokens.

While it’s not quite Sabacc as many die hard Star Wars fans may recognize it if they are familiar with the details of the setting and its lore, the Han Solo Card Game manages to capture the quick and dirty feel of being a smuggler pushing his luck. It’s approachable and easy to learn, but the dice and poker-like elements keep play engaging. In the end, for the cost of a large pizza, its a great casual game to pass the time with your fellow Corellian hotshots while sipping your favorite cantina beverage or watching the latest galactic adventure.

The Han Solo Card Game is available at most major retailers and online stores for around $20.00.