I’m not sure if there is a character that you might love to hate as much as Kylo Ren. You hate him for – SPOILER ALERT! – killing his Dad, Han Solo; you hate him for being so crazily angry and emotional. But then you also kind of like his mood swings; they seem so human and relatable. He is filled with angst and unpredictability; he’s also darkly humorous sometimes. I figure he needed something messy, gooey, and deliciously sweet to take the edge off.

If you have trouble obtaining the required phyllo, which should be available at Middle Eastern grocery stores, you can use a 13″ by 9″ phyllo variety and place in a 13″ by 9″ glass baking dish. You’ll want to make four layers of nuts and butter three sheets of phyllo at a time. You’ll need to cut it into 18 squares, which will end up yielding 36 portions. Bake for 40 minutes. This version will obviously be thicker, but works perfectly well.

If you use this recipe to make your own Kylo Phyllo, please share your pictures in the comments! 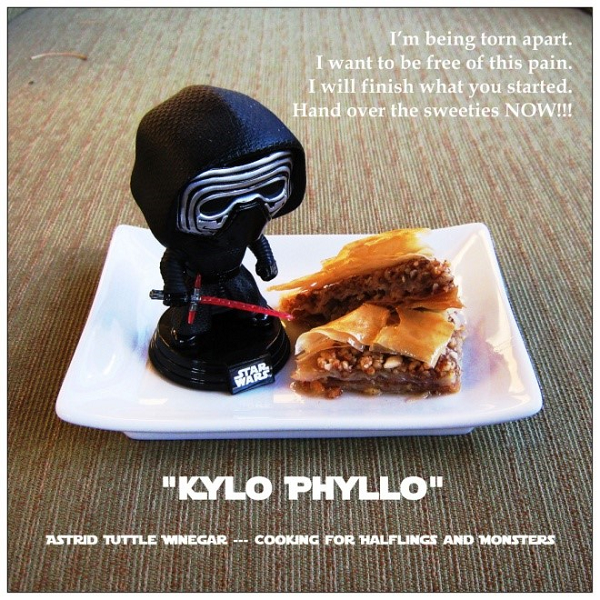 Melt the butter in a 2-quart saucepan and set aside (you’ll use the pot again later to make the syrup). Combine the almonds through the nutmeg in a large food processor and pulse until all the nuts are ground finely. Pour into a medium bowl.

Preheat oven to 350°. Coat a baker’s half sheet (13″ by 18″) with cooking spray. Count the phyllo sheets, so you’ll have an idea how many sheets will comprise each layer. Take 2 sheets and lay on the prepared baker’s sheet. Brush with some of the melted butter. Repeat layering until you have used a third of the phyllo. Sprinkle with half of the nut mixture. Repeat layering phyllo, the remaining nuts, then top with the last third of the phyllo, 2 or 3 sheets at a time, with butter between. Fold under any raggedy bits of phyllo and finish using the butter (don’t bother washing out the pot).

With a sharp knife and a gentle sawing motion, carefully cut 24 squares, then cut each square in half diagonally. Bake 30 minutes. Remove and let stand on a rack 15 minutes.

Meanwhile, once you put the Kylo Phyllo in the oven, combine the sugar, water, and lime juice in the 2-quart saucepan. Bring to a boil, then simmer on fairly low heat for 20 minutes, uncovered. Let stand to cool on stove.
After the pastry has cooled 15 minutes, spoon the warm syrup all over evenly. Let cool 2-3 hours before eating. Cover and store at room temperature, or you may cover and refrigerate or freeze. Microwave portions as desired for a freshly-baked taste. Makes 48 pieces.

Astrid Tuttle Winegar is the author of “Cooking for Halflings & Monsters: 111 Comfy, Cozy Recipes for Fantasy-Loving Souls” (in paperback and epub formats from your favorite online booksellers). She loves Middle-earth, Narnia, the Final Frontier, and many other things besides. She has a special love for the Galaxy Far, Far Away. She lives in the enchanted city of Albuquerque, New Mexico, with her husband. Visit her website for more information: Astrid Tuttle Winegar | Cooking for Halflings & Monsters. Staff Reporter.