Jenny Dolfen is a school teacher in English and Latin but for over 14 years, has been creating amazing works of art. She describes herself as a “self-taught” artist who began her art career illustrating for RPG gaming companies and private clients. She is well known for her Tolkien and fantasy works but has recently expanded her portfolio into the Star Wars galaxy.

I was fascinated by the scenes depicted in her new Star Wars illustrations and had to learn more about her work and the artist. Check out our conversation below. 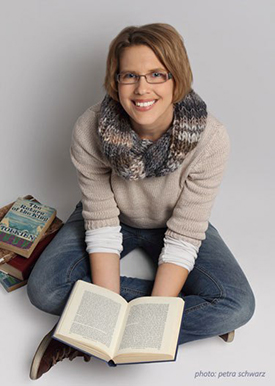 You have an extensive fantasy art portfolio. What attracted you to creating work based on Star Wars?

JD: The classic Star Wars films always had a rather strong Fantasy feel to them. The story was a hero’s journey, the characters were knights and princesses, so it was not very far away from the kind of stories I had loved since I was a child. I got into Star Wars very late in the day. While I grew up, in Germany in the eighties, anything with “war” in the title was widely frowned upon. I knew no Star Wars fans when I was a child. I saw “Return of the Jedi” when I was visiting my cousins around 1985 and remember feeling utterly bewildered by what was going on, and it left no impression whatsoever, apart from a dim memory of C-3PO and Jabba.

My first real contact with Star Wars came in 1996, when we Latin students were putting together our annual parody play for Saturnalia, to be performed to make fun of our professors. We decided to do “Bellum Stellarum”, and I volunteered for the role of Luke (a good student assistant trying to turn his father away from the Dark Side of Philology) before I really knew much about the character. We then watched the three Star Wars films in a row, and over writing the role and playing him, I fell in love with Luke Skywalker.

When I love something, I draw it. So that one theatrical interlude kicked off three years of drawing Star Wars. First, mainly copying from the photos, and then, around 1999, illustrating scenes from a Star Wars role-playing campaign my husband and I were playing, which was very pilot-centred. 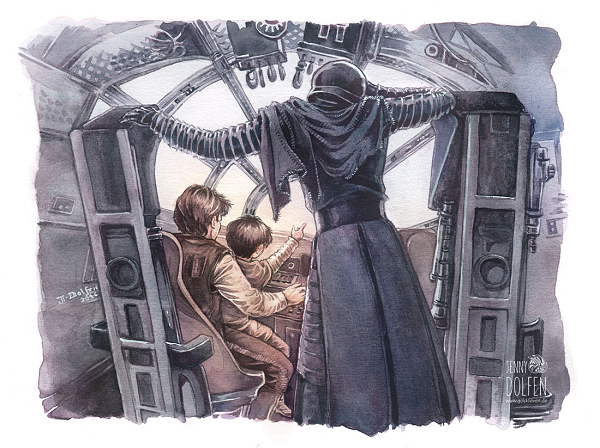 In your recent work, you portray many Star Wars personal and engaging family scenarios between Rey, Kylo Ren and more. What is inspiring these creations? What are your thoughts behind these works?

JD: What fascinates me about Star Wars – the old trilogy and The Force Awakens – is the character dynamics. The classic trilogy had wonderful characters, and a wonderful universe to play with, as well as some of my favourite story elements, mainly, a desperate struggle against an overwhelming opponent. I spent years exploring those stories and characters with the old trilogy, reading all the novels and comics (particularly the X-Wing ones).

The Prequels just threw me off. Characters, storyline, none of it interested me (though the visuals did their best), and I simply moved on to other things with my art for fifteen years. I didn’t think I’d return.

The Force Awakens brought it all back, in a way I had never anticipated. Based on the trailers, I was quite sure I’d like it, but didn’t really expect to go on another painting spree. After seeing the movie twice, and loving so many of the characters, I ended up with Kylo Ren. He was a character I’d hardly looked at twice during the merchandise onslaught prior to the movie release. I’d put him down as what I call “boys’ pyjama material” – a visually cool baddie with little to no character development but with a few cool lines and an epic lightsaber battle for the heroes to triumph, like Darth Vader or Darth Maul. Instead, he was an utterly messed-up, extremely complex human being with the promise of a fantastic story arc. He has a lot of open questions that are barely glimpsed in the film, and this is what I love to explore in my art. Missing scenes, backstory, and open questions. It’s a bit like visual fanfiction. I’ve always done that, with all the art I ever did – filling gaps. 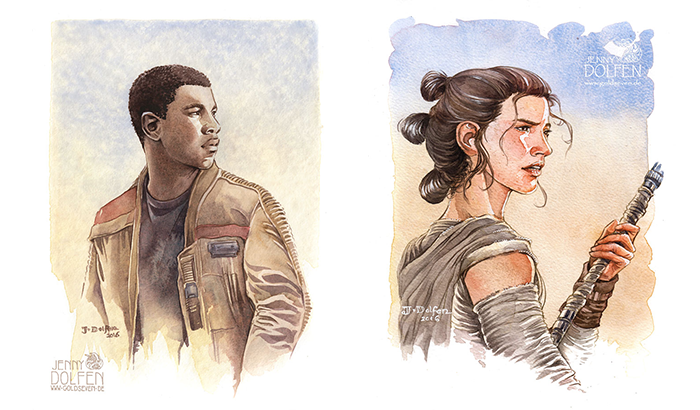 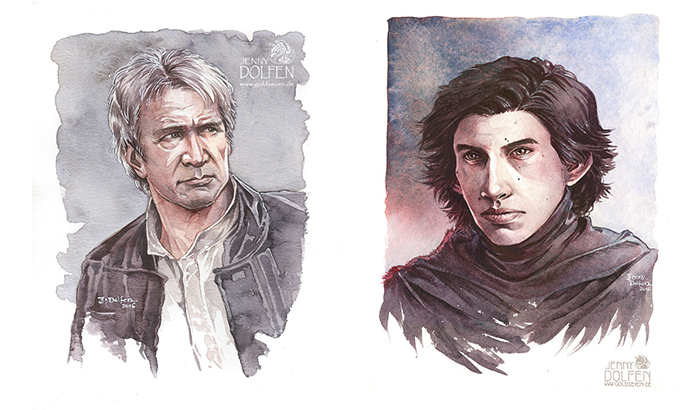 To me, your art has a story book fantasy feel to it. Even with your more sci-fi Star Wars work, there is an epic fantasy about it with soft and very detailed images. How would you describe your style of art?

JD: “Story” is the word, I think – whatever fascinates me has to have a compelling story and compelling characters as well as interesting visuals. Star Wars has all of it, and I like to tell stories in my pictures, as well.

My art style has evolved through my admiration of great Fantasy artists like Alan Lee and John Howe, as well as comic artists like Enrico Marini and Edvin Biukovic and classical Art Nouveau and storybook painters like Alfons Mucha, Arthur Rackham and Ivan Bilibin. I love faces. So I concentrate strongly on the characters and their relationships and less on locations or starships, at least at the moment. Though even the starships of Star Wars are designed in a way to hold great characterization. From the massive, threatening wedge of a Star Destroyer to a sleek, dynamic, almost heroic X-Wing (or the batlike, menacing edges of Kylo Ren’s shuttle), those ships have so much character that I have drawn them enthusiastically during my last Star Wars phase in the late nineties. 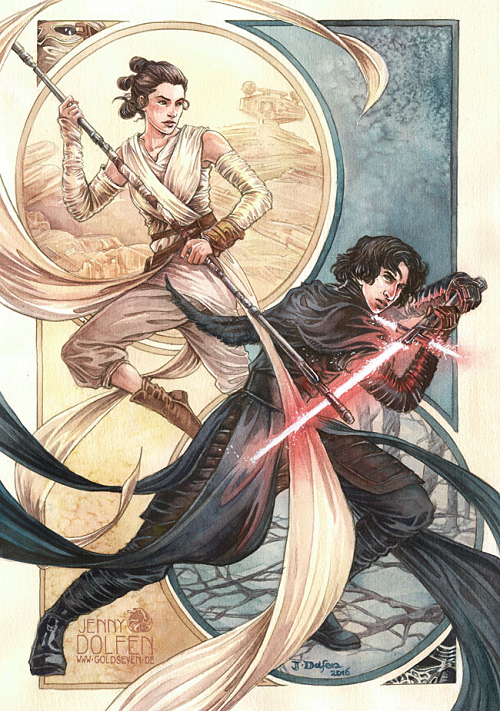 I have always been a Luke Skywalker fanboy, ever since A New Hope. When I grew up, I wanted to be Luke! What is your favorite subject to illustrate in the Star Wars universe? Who is your favorite?

JD: It’s a combination of an enticing character with interesting visuals. I also loved Luke, for both. I loved his seventies hair, and his very medieval leg wraps. Luke is a wonderful heroic character, as are Rey, Poe, and Finn. Kylo Ren is just beautifully messed up, and he does have some aspects that know well for myself, too. (When I’m really angry, I sometimes smash things. Ask my kids about the dent in the cellar door sometime.)

And overall, the costume design of Star Wars is so much fun to play with as an artist. I was having a great time with the costumes in my pieces of a younger Ben Solo – taking over much of the general cut of Kylo Ren’s present costume (I just love drawing those wrapped arms, also with Rey) and adding Jedi elements and colours. And well, his hair isn’t half bad either.

Star Wars has a very devout and outspoken fan base. Are you ever worried about what they will think of your work?

JD: I’ve never had much negative response to my art. A lot of what I explore in it does connect with a lot of people on a story level, apparently, so I see a lot of appreciation for what I’m doing. I’ve been a fairly high-profile artist (at least in certain circles) for one and a half decades. The last time around, some of my character art was shared by Aaron Allston himself, the author of the X-Wing: Wraith Squadron books. I have managed to develop a relaxed attitude online. Most of the time, I find it easy to listen to criticism, but also to shrug off the occasional trolling I get. Particularly if it’s directed at the movie or a character and not at me (why people feel they have to tell me that that TFA sucked, I don’t know, but well, that’s the Internet for you). My recent piece of Ben and little Rey was posted on Reddit and then featured on 9gag with a few million views, so you can imagine I caught a lot of mindless flak from people whose only objective in commenting is a snappy one-liner to garner many upvotes, the deeper below the belt, the better. But that’s a problem of the Internet and places like 9gag, not Star Wars, and not of my art. 99.9% of the people I’ve dealt with online in my artistic career have been respectful and friendly. 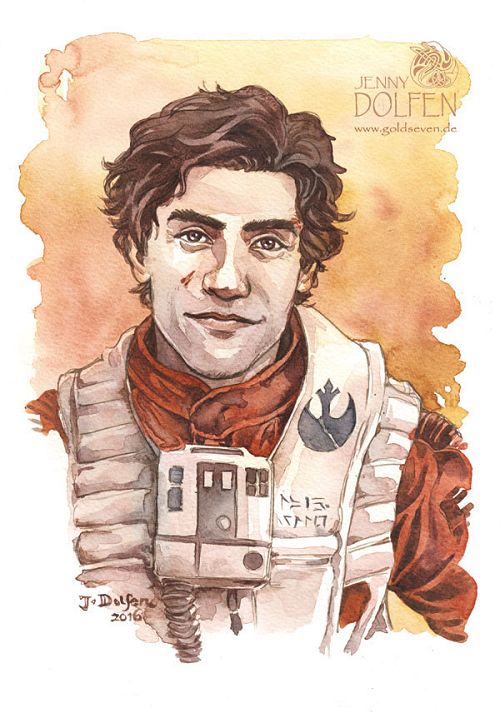 What did you think of The Force Awakens?

JD: I obviously loved it! It brought back the atmosphere of Star Wars that the Prequels were so badly lacking. The plot parallels to Episode IV didn’t bother me much; maybe you can say that the team did not risk a lot, but if the result is such a great movie with such great actors and characters in it, then I have very little to complain. We’ve seen it three times in theatres, my husband and I together with our two kids; for the second viewing, my parents came along, too. It’s great to have this connection over several generations, also with my students. Three things that TFA definitely did and ANH did not, was (1) a female protagonist who is one of the most likeable, and independent, females I’ve ever seen in an action movie, (2) male heroes who are downright adorable and not cynical American action heroes, (3) an antagonist that wants to be badass but fails at it, exposing a lot of himself in the process. All three of these are enough to make me very happy indeed.

You can see more of Jenny’s illustrations on her official site. 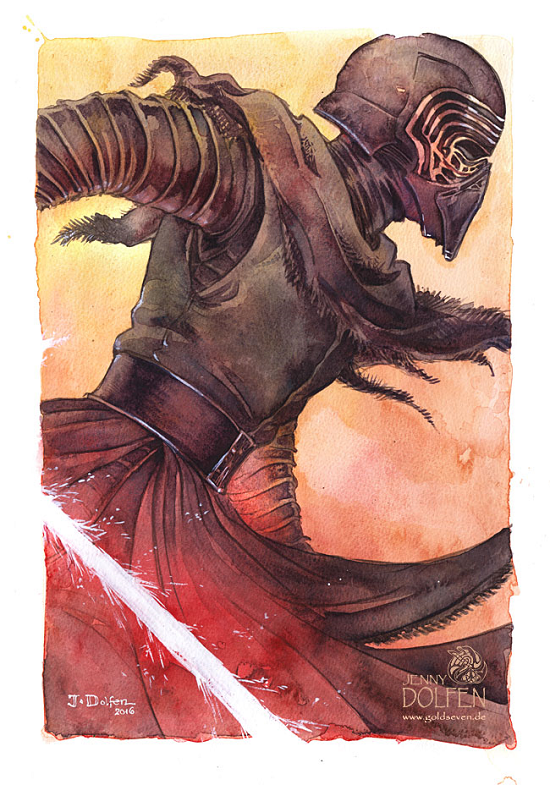 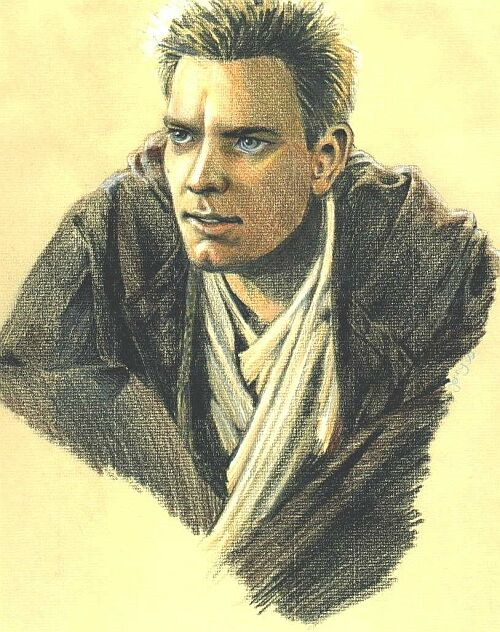 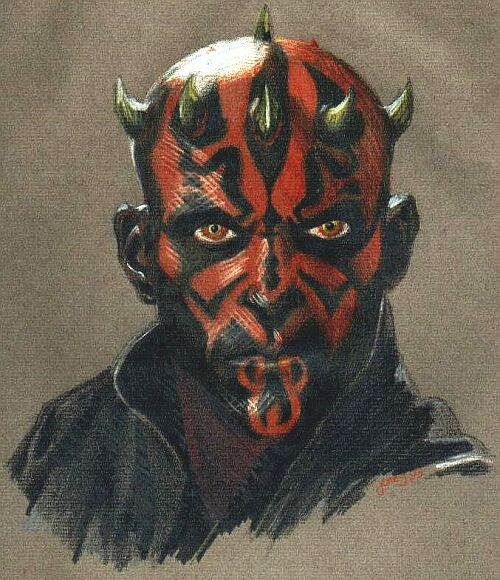 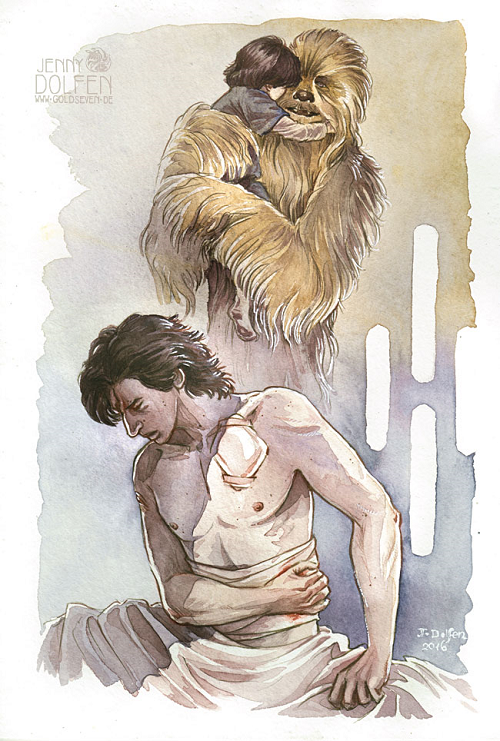