There are two nerdy fandoms that I am passionate about, Star Wars and Vikings.

From the moment I first watched Star Wars as a child, I was an instant fan. A new world of adventure awaited in my imagination, as I would gather with my friends to reenact the scenes from the films or to play with the many toys. These are among my fondest memories growing up.

Later, as I grew older, I found an interest in the fantasy genre and was introduced to Dungeons & Dragons by friends. This interest led me to stories of the “Vikings”. At first, all I knew was the fairy-tale version of the Vikings. The epic adventures, horned helmets, and savagery. As I looked deeper into the actual history of the Vikings, I became more interested in “Norse culture”. Don’t get me wrong. I am far from a scholar on the subject. I still love the glamorized fantasy elements of the culture which is why I enjoy History Channel’s “Vikings” so much.

So I was excited to find the Tattúínárdǿla Saga by Old Norse specialist and Director of Nordic Studies at the University of Colorado Boulder, Dr. Jackson Crawford that took the story of Star Wars and turned it into an Icelandic Saga. I have been a fan of Crawford’s Youtube channel and was thrilled by his combining the story of Star Wars with the style of a saga.

There have been other Star Wars adaptations using the writing styles of other literary styles like those in “William Shakespeare’s Star Wars”, but none have attempted a Viking style saga, until now.

It is writings like the meeting of Han Solo in Dr. Crawford’s Tattúínárdǿla, that impressed the “Fanboy” in me,

“I am named Hani, son of Jarl Sóló,” said the man, “Some men call me Dueling Hani. My ship is the Thousand-Year Falcon. Tsiubakka my comrade tells me that you seek to sail to the Aldiran Regions, and I can take you there, if it’s worth enough money to you.”
“Certainly it is,” said Víga-Óbívan, “If it’s a fast ship.”
“Fast ship?” said Dueling Hani, “Have you never heard of the Thousand-Year Falcon?”
“I am certain that I have not,” said Víga-Óbívan, “But is that surprising?”
“It is the ship that won the victory in the great rowing race at Kesseley, when Tsiubakka and I rowed the course in twelve hours,” said Dueling Hani, “The ship is faster than any ship of Falfadinn, even those well-renowned Korellian ships. It is fast enough for your purpose, old man. 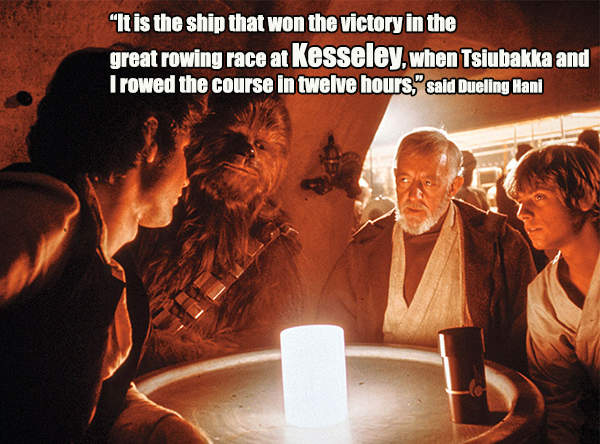 JC: I don’t describe myself as a Star Wars fan; my exposure to it really isn’t more than that of any other casual moviegoer alive during or since 1977. But that’s part of what compelled me to do this as a graduate student eight years ago; I had long observed to my students (and I still do) that Star Wars is such an embedded part of the narratives we tell as a culture today that it functions not unlike the Iliad in ancient Greek society or the Eddic myths in Norse society—as a well that anyone can draw references from, and have them understood by other people in the culture as sort of a touchstone of membership in the culture. If I breathe like I’m wearing an oxygen mask while I enter a classroom, students know that I’m setting myself up as a bad guy. If I tell my sister “(Verb) you must,” she knows I’m playing at being a wise counselor. So even the lightest of references communicate a whole range of assumptions and roles, even to people who aren’t serious fans of the stories they’re drawn from. That being said, to answer the other part of this question, I liked The Empire Strikes Back best both as a more tragic story and a more atmospheric exploration of an endlessly wide galaxy.

What are the common elements that Lucas used in his Star Wars stories that are a common theme or translate well with an Icelandic Sagas?

JC: When I wrote Tattúínárdǿla saga, the main things I needed to change were two: a) The Jedi had to be a (partially adoptive) family, since the Norse society described in the sagas was family-based and rural, and didn’t have an easy master-apprentice analog that I could turn the Jedi into, and b) The ending of the Luke/Vader plot had to be more tragic, since Icelandic sagas often do feature conflicts between family members, but they seldom end well or happily for the protagonist. Otherwise the stories from the films translated easily into the idiom of Norse sagas, especially (again) the tragic rivalry between close family members, but also in the episodic conflicts between sworn enemies.

I’ve been a fan of your Youtube page where you discuss Old Norse culture and appreciate how you distinguish between historic Vikings and fantasy. Like the Star Wars films, are the Icelandic Sagas a perception of fantasy for the sake of storytelling or can we learn from these stories? Do the Star Wars film reflect our culture today as the sagas did back then?

JC: I do think Star Wars reflects our culture, and shapes it—how many people want to be a Jedi Knight? I suspect it’s not unlike the proportion of people in medieval Iceland who listened to their own sagas and dreamed of going on Viking adventures. That being said, I think both the Norse sagas and the Star Wars films are primarily entertainment (of course, there are “more serious” and “less serious” episodes in each, and the “more serious” can express the values that the culture aspires to—for instance in Yoda’s pronouncements).

Vikings and Star Wars have developed a passionate and growing fan-base. What is it about these stories that you think appeals to people?

JC: I think that both kinds of stories offer an expansive atmosphere of exploration. With the Vikings, you not only have a culture that prized real-world exploration but one that told stories that are at best about half-preserved for us. Not only does that mean that the poems of the Poetic Edda (or main source for Norse myth) hint at more stories than we have written down, but the ones that are preserved often seem to be only half-visible, tempting us to imagine what’s beyond the vale of North Sea fog. Star Wars is similar, with an accepted “canon” of stories and places in the content of the main trilogies, but with hints of possibly numberless worlds and asteroids that can be explored. And in both, the spirit of adventure is strong—strap your sword, or your lightsaber, into your belt and hop aboard your longship, or your X-Wing, and sail off into the western horizon, or the stars.

“May the Fjords be with you.”

You can read the full Tattúínárdǿla Saga HERE.