“Hokey religions and ancient weapons are no match for a good blaster at your side, kid.”

If you were like us here at Star Wars Reporter, you probably grew up pretending to be Han Solo every now and then. Maybe you were flying around in a cardboard Millennium Falcon or trying to make the Kessel Run in less than 12 parsecs on your bicycle, Han Solo is pretty much the Star Wars standard for cool.

I saw a few great Han Solo costumes recently at Star Wars Celebration and no scruffy looking nerf herder costume is complete without Han’s DL44 Blaster. According to Wookiepeida, “the DL44 heavy blaster pistol is considered one of the most iconic and powerful blaster pistols in the galaxy”.

I have wanted my own DL 44 replica for as long as I can remember. There are a few companies out there that make beautiful DL44s but I wanted something that could be played with, even dropped on the floor. But also something that would still look cool on display. When I found the Disney Parks Star Wars Rebel Blaster on Amazon for under $20, it seemed like the perfect opportunity. The blaster can be found here: https://www.amazon.com/dp/B018OUXOE6/ref=cm_sw_r_cp_api_H-oCzbRSZ0V23 (Please note: when I recently checked the price of this particular blaster, it has gone up in price. There are several other plastic toys out there based on the DL44 and it should be easy enough to adapt the steps below.) 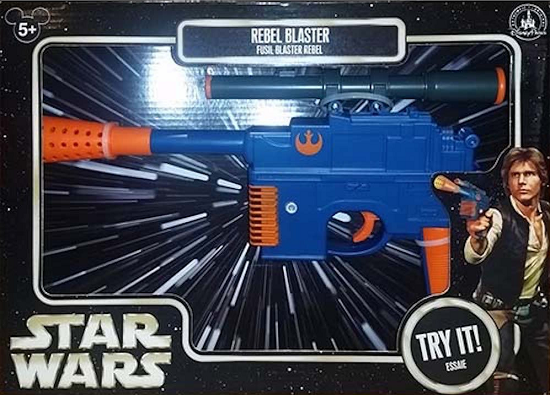 The blaster that I used comes in a bright orange and blue but the overall shape and scale is pretty accurate. 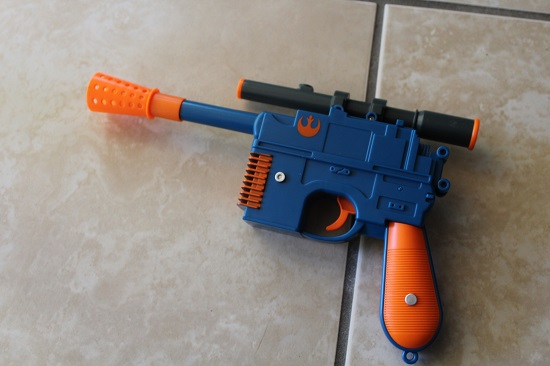 This DIY is mostly a painting project. Taking the individual pieces off was easy enough, just a few small screws. There are also some raised letters and a rebel symbol on the side which I was able to remove with a quick sanding of a low grit sandpaper.

I removed the handgrips, sight and muzzle set those aside. I also added a bit of painters tape around the barrel light. The whole thing got 2 light coats of a spray primer. It’s important to use a primer since it is difficult to get paint to stick to smooth plastic. Once that was dry, I used a gunmetal metallic spray paint over the whole thing. Let that dry completely, and I stress completely. Fingerprints in tacky spray paint will ruin the whole metal look. Once it is dry I used a dry brush in some silver acrylic paint along all the edges and in the places where you would expect to see some wear. This step can be as little or as intense as you want the battle damage on your blaster to be. I also used the silver acrylic on the muzzle piece

While the main piece was drying, I worked on the handgrips. The handgrips were the trickiest of this whole project. I used a combination of white and brown acrylic paint swirled around in an attempt to make a believable wood grain. Don’t be afraid to wipe down and restart this part. If you don’t like the way the wood grain is turning out, try again. It only took me a couple of attempts to get something that resembled wood grain and I’m pretty happy with the final result. (Picture of completed but disassembled front/back) I also used a clear spray paint over the hand grips before they were reinstalled because I was trying to create a bit of a lacquered look. This step is not necessary, try it without and see what you think. 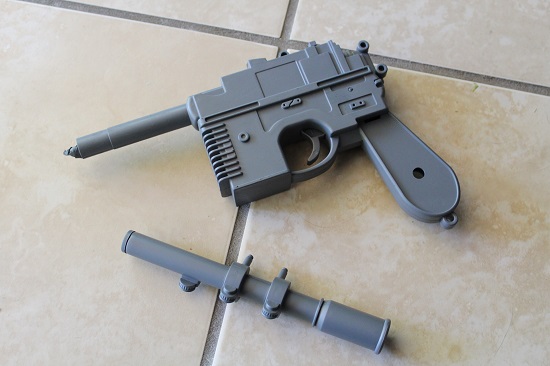 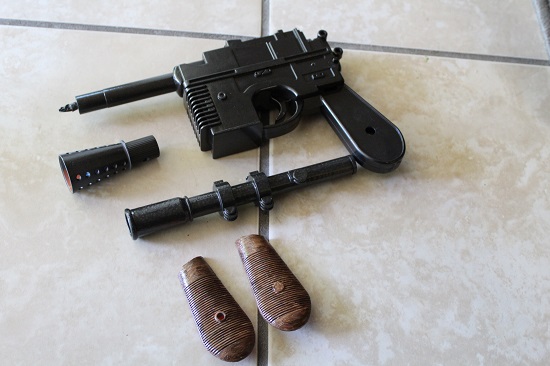 Once all of the pieces are dry, carefully put the whole thing back together and you are basically ready to impress your friends with a “Who shot first” reenactment! This was an overall easy and fun project. With just a little bit of spray paint and patience you can make your own DL44 replica. Show us your projects! 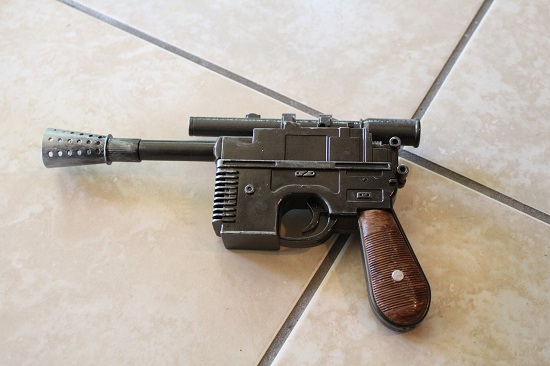