The series will premiere on November 30th and will feature Luke, Han, Leia, Chewbacca and all our favorite heroes and villains from the saga. The series “had me at” MORE adventures with Luke Skywalker! “With Galaxy of Adventures, we wanted to craft something that allowed parents to help their kids take their first step into a much larger world whether they were ready to show their kids the films or wanted to find new ways to explore the content,” said James Waugh, Lucasfilm’s vice president for franchise content and strategy. – StarWars.Com

Like the previous “Forces of Destiny” series of shorts, I appreciate the simple story that tied into the previous films in “never before seen” situations. I also love that there is a new focus with the animations recently, including Star Wars Resistance, to introduce young children to Star Wars while being interesting for adults. A focus on family.

Galaxy of Adventures does just that, providing a kid-friendly entry point into some of the greatest characters, moments, and themes from Star Wars at large. “With Episode IX coming in December, and being the conclusion of the Skywalker saga — the long journey over 40 years of storytelling comes to its end — Galaxy of Adventures walks through the great moments and themes of the stories that led us here and introduces a new generation to them, in time for many to see this finale.” – StarWars.Com

The creative teams over at Lucasfilm continue to explore a variety of animation style and Galaxy of Adventures is no exception. I really love the anime style they have chosen to use. I expect there to be “blow back” from some fans as recent history has shown with some criticism from fans regarding Star Wars Resistance. Like I have said before, some fans just need time to get used to new ways.

Are YOU excited for the new animated series? Let us know in the comments. 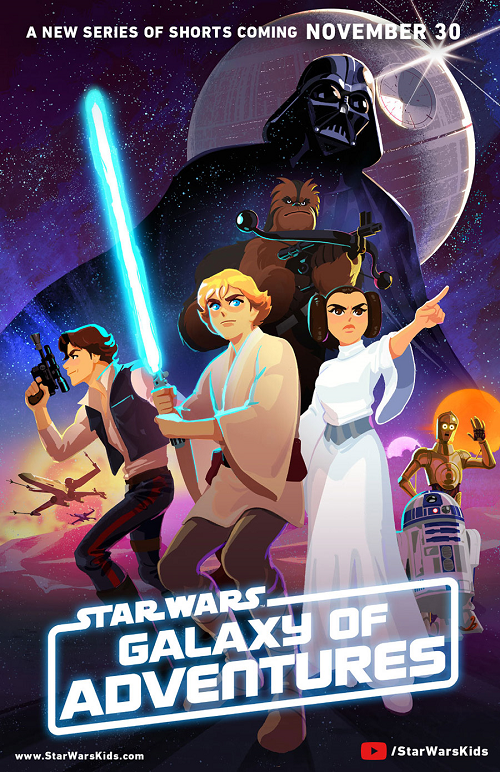