Columbia Sports Wear has revealed a new jacket inspired by the Empire Strikes Back. Not a jacket that the characters wore in the film but the jacket that was worn by the crew.

That’s right! Columbia has created a replica of the iconic parkas worn by the crew that filmed in 1979 Norway for the Hoth scenes in the Empire Strikes Back.

“One of the things we thought about was, ‘What are our fans excited about?’” says Lacey Prince, senior manager, product design & development, softlines, at Lucasfilm. “They’re excited about things that are nostalgic. They’re excited about the original series. So we just started doing some research. Was there anything cool and special in Episodes IV, V, and VI that we haven’t explored before? Oddly enough, we came across some of the crew photos. There’s some really great imagery of Mark and Carrie together, and that just really got us thinking. Like, ‘What if we tried to do something that wasn’t necessarily inspired by what the characters were wearing in the film, but by what the crew had?’ And that could be something we haven’t done before.” – StarWars.com The Star Wars Empire Crew Parka is no simple “novelty” jacket either. Columbia has created a vintage style jacket but added all the modern technical elements that make the parka serious outerwear, including a waterproof outer shell with “Omni-heat thermal reflective lining that will keep you, according to Columbia, “as warm as a Wookiee”.

I remember seeing these original parkas in the “Making of The Empire Strikes Back” documentary on tv and wishing I was part of the crew in the film. To be honest, I always wished that I was Luke Skywalker but being part of the crew was a close second!

“I hope that fans will be just as excited about this as we are,” Lacey Prince, senior manager, product design & development says. “I mean, this is a really cool way to bring an authentic piece that resonates with Lucasfilm history.”

Mark Hamill will be signing 30 of these replica Crew Parkas that will sell for MSRP of $1,980 with the proceeds going to college access programs and scholarships.

In a Tweet to Columbia, I volunteered to test out one of these parkas for, you know…SCIENCE as well inquiring if Mark Hamill came with the parkas. My response from Columbia – “Mark Hamill not included”. 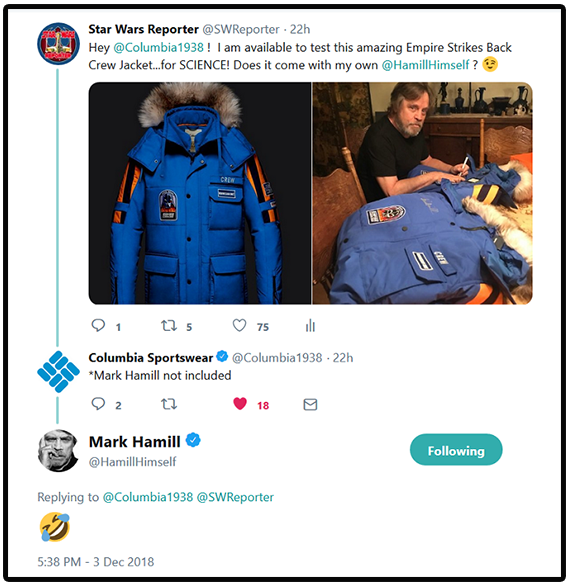 To learn more about the Columbia Empire Strikes Back Crew Parka, visit the official site HERE.