In an age of “fan outrage”, one group stands above to exemplify what Star Wars fandom should be. That group is The 501st Legion.

Established in 1997, the 501st Legion began as a costuming group of Star Wars fans that has evolved into an iconic community found worldwide. Not only are they a regular feature at fan conventions and events, the 501st have taken on a critical role in promoting numerous charities. Their presence at Children’s Hospitals has changed the image of “Star Wars Nerd” to ” Star Wars humanitarianism”.

Speechless Films has created a documentary that follows the 501st UK Garrison and spotlights an inside look at the organization. From Producers Ross Joseph and Tom Long. Directed by Tom Long. The documentary will follow and give viewers and intimate look at the 501st Legion UK Garrison from costume creation, meeting fans and charity work at children’s hospitals and more.

Speechless Films agreed to an exclusive interview with Star Wars Reporter about Star Wars, the fans and their upcoming documentary.

What inspired you to create this documentary? 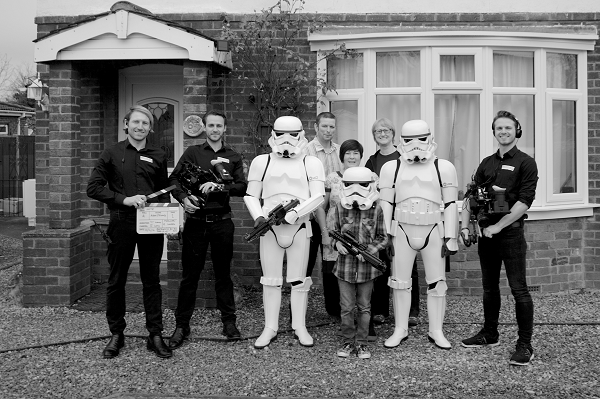 What is it about Star Wars that appeals to people that make them such passionate fans?

SF: That’s probably a different answer for every individual. For the team at Speechless, we believe that Star Wars is unique. It changed history and entices you in a way that no other film franchise had managed to do before A New Hope was released. It also has a sense of nostalgia for both older and younger generations. We all remember watching Star Wars as a child and playing with Star Wars toys.

Star Wars fans are some of the most devout and critical people when it comes to the genre. When you were creating this documentary, were you worried about what these fans would think?

SF: In making any film, we believe filmmakers will always worry whether the film will be well received. Star Wars is a huge franchise with dedicated fans. Whilst we have pondered what fans will think of Heroes of the Empire, we find comfort in knowing that we’ve tried to tell the most authentic and compelling story we can about the 501st.

Is there a moment in the documentary that stood out to you in representing what the 501st are and do?

SF: The 501st UKG visit to the hospital is the moment that stood out to us when shooting and cutting the film. It was humbling to see the lengths that the UKG went to to make a difference to a sick child’s day, and inspiring that it’s brought together mutual love of Star Wars. The UKG really go above and beyond in making a difference to others. One simple act of visiting a child in hospital is a memory that a child may cherish forever. It was incredible to witness and capture.

SF: We think there’s two key factors that people who label Star Wars costumers are not aware of. Firstly, there’s the charity side of the UKG. The work they do makes a genuine difference to the lives of others that isn’t necessarily seen or appreciated without researching what they do. Secondly, costuming is far more than just dressing up. It’s an art. The costumes they have are film accurate the highest possible standard, requiring hours of painstaking research and craftsmanship to build. The level of skill and detail required to create the costumes is not necessarily appreciated until you are aware of it.

The 501st Legion are a dedicated group of Star Wars fans who have contributed their time to charities, children and more. How important is the 501st to the Star Wars community?

What will fans see in the documentary that they don’t already know about the 501st Legion organization?

SF: Fans will see the full story of the 501st UKG for the first time. The UKG have never allowed a filmmaker behind the scenes with them before. In addition to a few very touching charity stories, you will also see what inspires and drives the UKG members. We also explore the artistic side of costuming and prop making and we even filmed and authenticated original Stormtrooper from A New Hope.

I have always loved the 501st Legion. Although I have never been a member, I do have friends that are part of the organization, including Star Wars Reporter writer Jennifer “Kylo Jen” Beauvois which shows me the amazing quality of character they attract. I look forward to the release of this documentary and how it will educate people on the importance they bring. Importance as a positive influence on fans and also with what they add to their perspective communities.

To learn more about Speechless Films and “Heroes of the Empire”, visit the official site HERE.