Since the first announcement and image of Mark Hamill in his new role on History Channel’s “Knightfall” series, I have been very excited for season 2!

“KNIGHTFALL Season 2 begins the march to war between King Philip of France and his sworn enemies,the Knights Templar. As the Templars ready themselves for the storm to come, Talus, a battle-hardened veteran of the Crusades, trains the next generation of men he calls “God’s Executioners”. There will be a reckoning between long-standing rivals – Landry and fallen-knight Gawain, De Nogaret and Pope Boniface – while Princess Isabella takes her first steps to becoming the “She-Wolf of France”. As King Philip works to destroy the reputation of the Templars to the public at large, Prince Louis, his sadistic young son, unleashes the dogs of war on the legendary Knights, reaching a brutal, final climax on Friday the 13th.” – History Channel

In an interview today on Good Morning America, Mark Hamill talks about his new role where he trades in his “Laser Sword” for that of chainmail and shield

“I have to tell you,” said Hamill in the Good Morning America interview, “that I do the best that I can with the horse riding and the sword fighting and all that. These wonderful sets and the great cast and these stories they’ve given us, it’s like pinch me, I can’t believe it’s still happening for me and I’m enjoying every minute of it.”

Most of us grew up watching Mark in his famous role of Luke Skywalker flying around the stars saving the galaxy, fighting with lightsabers, training Jedi and more. In this new role, we will also get to see a more gritty side of Mark and maybe another kind of “teacher” that we haven’t seen before – and I am very excited! From one “Order” in the stars to an order in shining armor. This excitement was shared by Knightfall co-star, Tom Cullen, who portrays Templar Knight leader, Landry.

“I was obsessed with Star Wars,” said the reminiscent Cullen, “and so to get to meet him and work with him is a dream come true. We’re swinging swords around so, you know, it’s difficult not to make a Lightsaber noise when you first start working with him.” 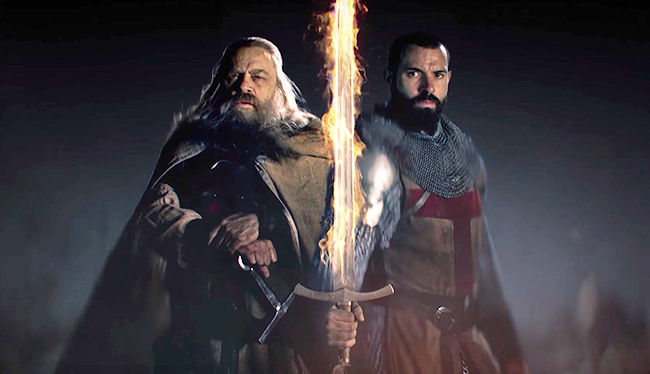