“In the Galaxy of Adventures, the Ewoks might be small, but the are mighty.”

In the latest episode of the animated Star Wars Galaxy of Adventures, the Ewoks become the heroes of the Rebellion as they take on the Empire in a scene from Return of the Jedi. The Ewoks swarm the surprised Stormtroopers and unleash a furry of devastation! It is an enjoyable and fun look back to the final battle of the original trilogy.

Such skill was also touched upon in the animated, Forces of Destiny where we see Ewoks assisting Hera in The Ghost in taking out some Tie Fighters over Endor. And in the episode, “An Imperial Feast”, we even see a hint that the Ewoks might very well have BBQ’d (or tried to) the Stormtroopers in Return of the Jedi!

I LOVE THE EWOKS. #Ewoks4Life

The Ewoks have always received negative reactions from fans. From their first appearance in The Return of the Jedi to the present, people seem to brush these adorable (and dangerous) teddy bear like warriors as no more than a merchandising gimmick. They may be true in their conception but that still doesn’t take away from their contribution to the defeat of the Empire.

When I first watched Return of the Jedi in theaters as a kid, I never put much thought into the Ewoks and how “realistic” a primitive group of “murder bears” could defeat the power of the technologically advanced Empire. I just loved the story about the smallest of creatures overcoming the arrogance and power of a galactic force. A victory that had eluded the Rebellion for so long. 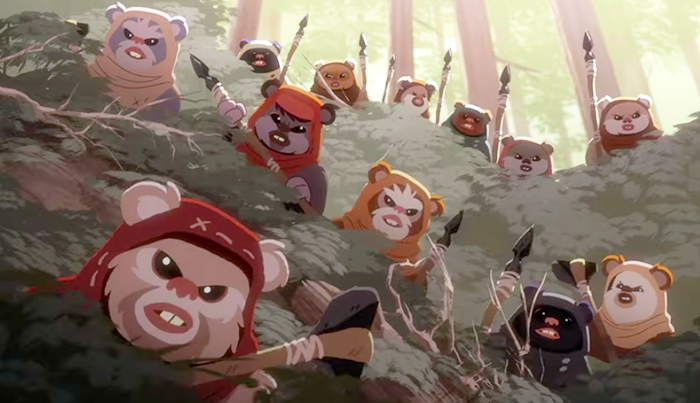 As I became older, I have thought about the viability of such a thing happening. How can an army of such low tech defeat an advanced military? I look to history for such examples and there are may examples of this such scenario happening such as, the Zulu vs. The British, Afghanistan vs. The Soviet Union and more.

Either way, the Ewoks are still just as fun and important to me today as they were when I was a kid. I only hope that they make a return to a future Star Wars movie. Maybe we’ll get to see them in The Rise of Skywalker?