It was an exciting and busy time for Star Wars fans at the D23 Expo, with a number of announcements and a long awaited trailer. The following is a recap of all the Star Wars news that took place today at the D23 Expo.

From the official Disney Press Release;

This afternoon, Disney+ made its D23 Expo debut with its first-ever showcase presentation, announcing six new series in development and revealing key details about the highly anticipated streaming service to an enthusiastic audience at the Anaheim Convention Center in Anaheim. The event showcased the sweeping array of talent with in-person and video appearances from the stars of Disney+’s slate of originals from Disney, Pixar, Marvel, Star Wars, and National Geographic and included sneak peeks, trailer premieres, and exclusive news about the service and its upcoming projects. Actress Yvette Nicole Brown, who stars in the Disney+ original film “Lady and the Tramp,” hosted the lively presentation, welcoming Kevin Mayer, chairman, Direct-to-Consumer & International, to the stage to kick off the show.

“With less than three months until launch, Disney+ will soon entertain and inspire audiences of all ages for generations to come, and we’re excited to preview some of the amazing original content being created for the service exclusively from our world-class brands today at the D23 Expo,” said Mayer. “Storytelling is the cornerstone of The Walt Disney Company and we’re thrilled to unveil a new slate of original shows from the Star Wars and Marvel cinematic universes, along with popular television franchises set to return with all-new series streaming only on Disney+.”

It has finally been confirmed! To the delight of the fandom that hoped that the rumors were true, Ewan McGregor made a surprise appearance to announce his return as Obi-Wan Kenobi in a new untitled series from Lucasfilm. “The Mandalorian,” executive producers Jon Favreau and Dave Filoni joined series stars Pedro Pascal, Gina Carano, Carl Weathers and Giancarlo Esposito, along with Taika Waititi, who brings the droid IG-11 to life, to premiere the teaser trailer for the first Star Wars live-action series. Earlier in the day at the Disney Legends Awards Ceremony, Robert A. Iger, chairman and chief executive officer, The Walt Disney Company, announced that new Disney Legend Ming-Na Wen will join the cast of the series. Set after the fall of the Empire and before the emergence of the First Order, “The Mandalorian” follows the travails of a lone gunfighter in the outer reaches of the galaxy far from the authority of the New Republic. Kathleen Kennedy announced that the highly anticipated new season of “Star Wars: The Clone Wars” will stream on Disney+ in February 2020. The Emmy® award-winning animated series will be returning with twelve all-new episodes and will mark the return of classic characters Anakin Skywalker, Obi-Wan Kenobi and fan-favorites Ahsoka Tano and Captain Rex. Stars Diego Luna and Alan Tudyk joined Kathleen Kennedy to introduce the audience to the second Lucasfilm live-action series for Disney+, which is now in development. Both actors are reprising their roles from “Rogue One: A Star Wars Story,” and the stories follow Cassian Andor’s adventures as a rebel spy during the formative years of the Rebellion, before the events of “A New Hope.” 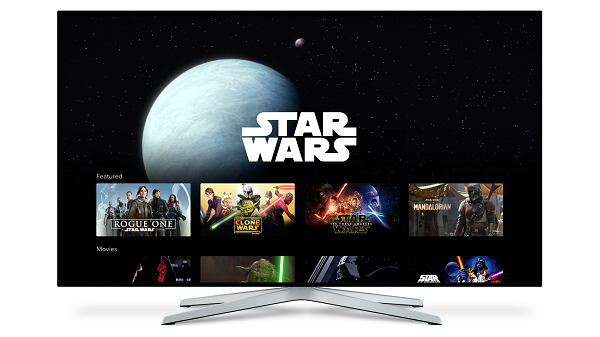 Launching on November 12, 2019, Disney+ will be the dedicated streaming home for movies and shows from Disney, Pixar, Marvel, Star Wars, National Geographic, and more, together, for the first time. From The Walt Disney Company’s Direct-to-Consumer and International segment, Disney+ will offer ad-free programming with a variety of original feature-length films, documentaries, live-action and animated series and short-form content. Alongside unprecedented access to Disney’s incredible library of film and television entertainment, and 30 seasons of “The Simpsons” in the U.S., the service will also be the exclusive streaming home for films released by The Walt Disney Studios in 2019 and beyond, including “Captain Marvel,” “Avengers: Endgame,” “Aladdin,” “Toy Story 4,” “The Lion King,” “Maleficent: Mistress of Evil,” “Frozen 2,”and “Star Wars: The Rise of Skywalker.” The service will launch in select geographic territories, including U.S., Canada, and The Netherlands, followed shortly by Australia and New Zealand, with the expectation to be available in all major markets within the first two-years. Visit DisneyPlus.com to learn more.