Delilah Dawson’s latest literary adventure in the Star Wars galaxy takes us all the way to the edge of Wild Space. Star Wars: Galaxy’s Edge Black Spire that not only joins the Journey to The Rise of Skywalker, but as the title implies, is tied into the new theme parks at Disneyland and Disney World. But Black Spire is more than just a glorified theme park commercial. In an unexpected surprise, it also serves as a sequel to one of Dawson’s other Star wars novels, Phasma. This time around we find Vi Moradi and CD-0922 (aka Cardinal, now going by the moniker Archex thrown together as allies and given a new mission by General Leia Organa in a galaxy where the Resistance is on the verge of collapse in the aftermath of the Battle of Crait as seen in The Last Jedi.

Moradi, a spy and Resistance idealist, has been tasked by the General with exploring the planet Baatu to see if is a suitable place to establish a new base of operations for the Resistance. Leia believes that Baatu’s out of the way location, lack of resources, and transient population will make it a perfect place to hide from the iron might of the First Order. She sends Moradi and the reluctant Archex to investigate the planet’s receptiveness to Resistance ideology, but things get complicated when their ship crashes on Baatu and is then ravaged by scavengers. In order to raise the credits to enact the necessary repairs, Moradi attempts to ingratiate herself to the locals of nearby Black Spire Outpost and takes a job working for a local junk scavenger, Savi. As Moradi gets to know the people and politics of Black Spire outpost, she has to face apathy from the general population and corruption from a local criminal syndicate.

Meanwhile, Archex — who was wounded in the crash that marked their entrance to Baatu — is trying to survive in the wilderness just beyond Black Spire Outpost. It seems as though if his own injuries don’t kill him, then the psychological trauma from his time in the First Order may drive him mad. In the wake of these difficulties, things only get more complicated when they’re discovered by Lt. Wulgar Kath of the First Order. Kath, now hunting for the overwhelmed Moradi and the rogue Archex, is bent on bending Baatu and the people of Black Spire Outpost to the will of the First Order. 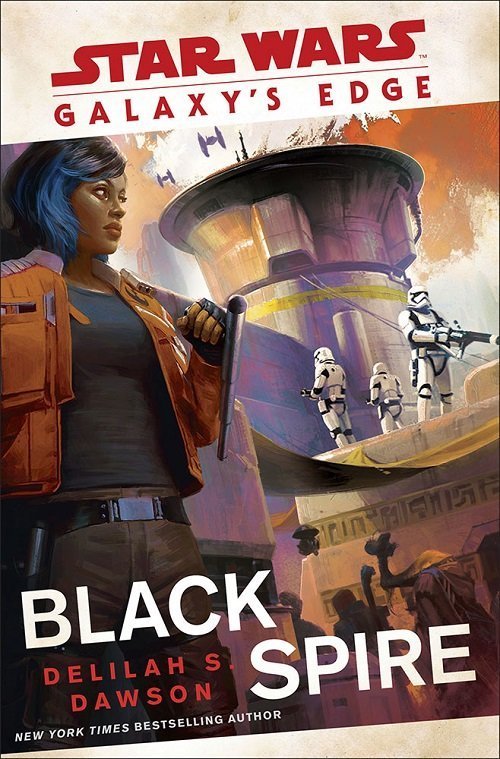 Black Spire is an enjoyable Star Wars adventure and Dawson’s brisk writing style lends itself well to telling stories in a galaxy far, far away. While the first few chapters of the book feel like a thinly veiled advertisement for and tour of the Disney theme parks, Dawson does a fine of job of taking the seemingly obligatory details that are front-loaded into the story and turning them into an engaging, fast-paced story that keeps the reader engaged. Told primarily from Moradi’s point of view, it might leave some feeling that Archex and his internal struggle don’t get enough pages to do justice to an increasingly complex character. But, without revealing too many spoilers, Black Spire does a fine job of standing on its own as an enjoyable (but not required) contribution to the growing canon of Star Wars novels.

It’s not the deep character study that Dawson offered in her Phasma novel, nor is it the gripping prequel we got with James Luceno’s Rogue One tie-in novel Catalyst. But it is an enjoyable read that’s not overwhelmed with a reliance on traditional tropes of Star Wars like lightsabers and x-wings. Black Spire feels like the story of a stranger drawn into a leaving, breathing community. In this community that has remained untouched by war and rebellion, it’s the story of how a community deals when that war comes suddenly to their doorstep.

For those soon making a trip to Disney’s Parks and visiting Black Spire Outpost, this is a fun little primer and adds to the lived-in experience of the new additions to Disneyland and Disney World. For those who don’t see a visit to the parks in their future, this is a fun little vicarious trip to locations we’ve only seen in YouTube Videos and promotional photos. So, if you’re looking for a fun read to pass the time until The Rise of Skywalker comes out or if you want to explore Black Spire Outpost without having to head to California or Florida, then Dawson’s Star Wars: Galaxy’s Edge Black Spire is well worth the price of admission. 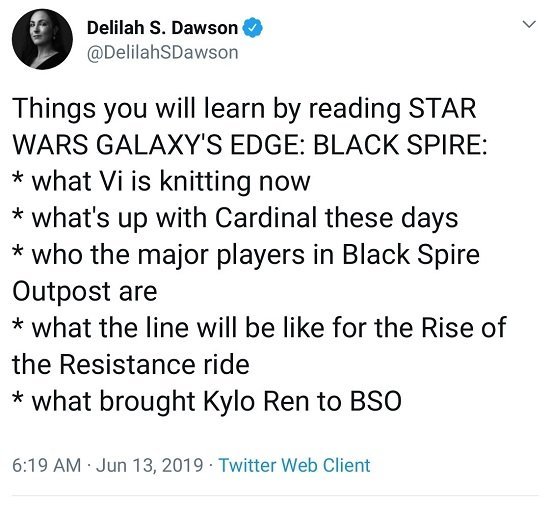