Can Doza save a pilot from her past? Find out on the next Star Wars Resistance SUNDAY, NOVEMBER 24th (12:01 a.m. PT) on the DisneyNOW app and Disney Channel VOD. 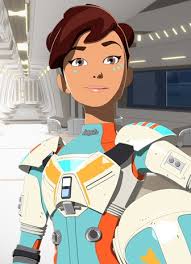 “Torra Doza is a human female pilot who lived on the Colossus, an aircraft refueling station located on the Outer Rim world of Castilon, during the era of the New Republic. The daughter of a former pilot for the Alliance to Restore the Republic, her mother’s exploits helped inspire Doza’s own love of flying. She is a resident of the facility’s upper levels, owing to the position of her father, Captain Imanuel Doza, as station operator.

Doza piloted the Blue Ace, a state-of-the-art ship with various customizations suited to her personality and racing skills, during the time of the cold war. Her membership in Ace Squadron—a starfighter squadron employed by the station for defense purposes—afforded Doza the opportunity to fly alongside some of the most skilled pilots in the galaxy. She was an avid racer who often participated in the station’s racing contests. After his arrival in 34 ABY, Torra became acquainted with fellow racer Kazuda Xiono, secretly a Resistance spy, and eventually came to suspect there was more to Xiono than he claimed. ” – Fandom.Com