Since the last chapter of The Mandalorian: The Sin, Star Wars fans have been universally excited for the future of the saga.

Directed by Deborah Chow, fans were treated with some of the best action in Star Wars with the climactic battle that involved an army of Mandalorians battling to help “Mando” and “Baby Yoda” escape from the guild bounty hunters! To me, this exciting battle reminded me of the final battle in Rogue One. Lots of “pew pew” and those JET PACK Mando’s flying in…. #MindBlown !

How could they possibly top that action? Enter, Cara Dune.

In the next Chapter of the series [Title not yet available] we finally get to see Cara Dune, portrayed by actor and MMA fighter, Gina Carano. In Chapter 4, Carano will play an ex-soldier, (possibly ex-Rebel Soldier due to that Rebel logo tattoo under her eye), that “The Mandalorian” will team up with to protect a village from raiders. 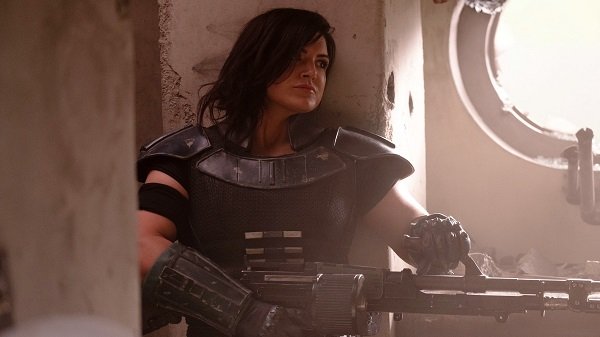 I, like many others, have been very much looking forward to Carano’s character enter the series. According to IMDB, she will be in 3 chapters of the series. Carano was a trailblazing force in Women’s MMA and has become a force in Hollywood with such films as Fast and Furious: Showdown and Deadpool. She will bring a strong and convincing portrayal to her role of “ex-soldier”. This will also help her to stand out on screen with her armored Mandalorian counterpart and I fully anticipate another episode of action filled with blasters and explosions!