Can Kaz and Yeager liberate Tam from the First Order? Can the Colossus overcome a new threat? Find out on the series finale for Star Wars Resistance SUNDAY, JANUARY 26th (12:01 a.m. PT) on the DisneyNOW app and Disney Channel VOD. 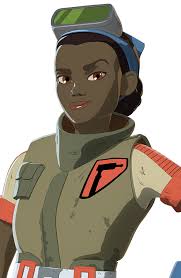 “Tamara Ryvora, nicknamed “Tam,” and later designated DT-533, was a human female mechanic from Kuat who served as a member of Team Fireball on the Colossus, a refueling station in the Outer Rim Territories. She aspired to be a star racer and saw repairing the derelict starship Fireball as a second chance at her goal, after having lost her first ship. Eventually, Tam joined the First Order and served as a TIE pilot.” -Fandom.Com