Bucketheads: The “Band of Brothers” of the Empire?

In 2018 we interviewed Transmute Pictures regarding their first fan film, “Bucketheads: A Star Wars Story”. Below is an excerpt from that interview. See the FULL INTERVIEW here.

Transmute Pictures: The initial spark for the project came from a conversation between Marco, myself and another film industry friend Anthony Vani, who also happened to be our production designer on Bucketheads. We had just finished filming another little Star Wars project and got to talking about what kind of other stories we’d like to tell in the Star Wars universe. We all agreed that there weren’t a lot of stories told from the perspective of the Empire, specifically the people fighting the rebels on the ground, the Stormtroopers. The whole idea sort of blossomed from there. Marco had also recently been accepted into the Outer Rim Garrison of the 501st so we knew we could make it a reality if we set our minds to it. For those who don’t know, the 501st is a Star Wars costuming club with an emphasis on charity work that holds their member to an incredibly high standard in regards to their costuming and cosplaying.

Transmute Pictures: We chose the title “Bucketheads” for a number of reasons. When we first conceptualized the project we agreed that we wanted to show a darker side to the Star Wars universe, the grittiness of the civil war that encapsulates the galaxy and the many shades of grey that embody right and wrong in any conflict. We talked a lot about other war films like Saving Private Ryan, Band of Brothers, Jarheads, films like that. As we were writing we quickly realized that a darker portrayal of universe required our characters to utililze a darker vocabulary. We started to research canonical slang and came across the term Bucketheads. It’s actually a term from the expanded universe (and I think the only thing from the expanded universe we incorporated into the film) and we instantly saw the connection with “Jarheads”. From there it just kind of stuck. 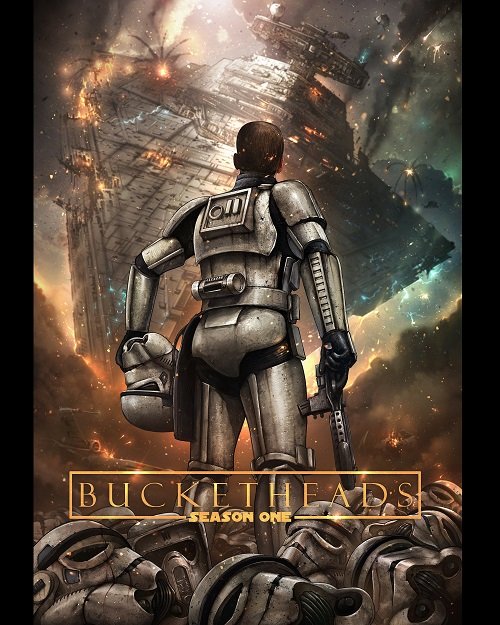