Can’t go to Galaxy’s Edge at Disney World? No problem, EA has the next best thing with the release of their upcoming game pack, The Sims™ 4 Star Wars™: Journey to Batuu, on September 8, 2020.

“Experience the Edge of the Galaxy
From the moment Sims arrive on Batuu, they’ll be surrounded by the sights, sounds, and smells of Star Wars™. Majestic petrified trees rise high over the settlements and ships pass overhead, engines whining. Black Spire Outpost hums with activity as alien locals and busy droids go about their days. Vendors serve up Ronto Wraps and Fried Endorian Tip-Yip to hungry Niktos and Rodians. Curious Abednedos, Mirialans, and Twi’leks browse the wares at Dok-Ondar’s Den of Antiquities. Sims might recognize a certain infamous ship, the Millennium Falcon™, or hope to escape the notice of patrolling stormtroopers. But once they arrive, they’ll never want to leave.” 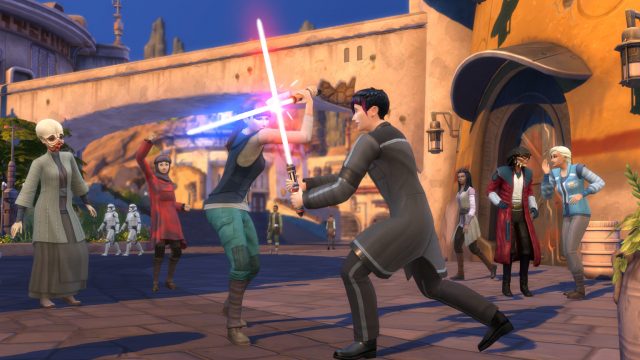 Features include, earning your reputation in the galaxy with missions, build your own lightsaber, hang out the the many alien species in Oga’s Cantina and more!

I played Sims 1 when it first came out and have only returned to play Sims 4, after my oldest daughter got me back into it. Now we are both creating fun homes and more. While I had access to clothing my Sim with Star Wars themed clothes (which is the reason I started playing again), with this new game pack, I can actually experience the Star Wars world! 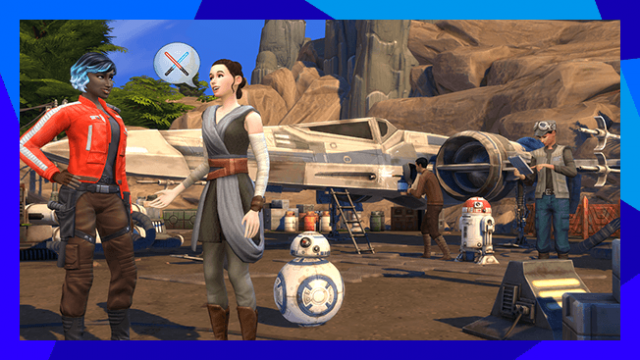