This is a SPOILER FREE review

It has been a long wait for Star Wars fans but Season 2 of the Emmy Award Winning show, The Mandalorian, premiered today with the first episode titled – “The Marshal”.

With the tremendous success of the first season, there was great anticipation from the fandom to see where show runners Jon Favreau and Dave Filoni would take the story of the bounty hunter on his quest and the premiere episode, “The Marshal” is an exciting start to that journey. The Mandalorian continues to satisfy the fandom with its combining of Star Wars nostalgia with new adventures and heroes. In keeping with the “wild west” theme that season 1 delivered, The Marshal stays with this story arc and is a story of a mysterious stranger [Mandalo] arriving in a small town where danger finds him and he is tasked to save the locals. With very little “Baby Yoda” in the episode, the visuals in Chapter 9 are still a nostalgia Star Wars Nerd’s dream! Filled with amazing practical effects that we all love including a droid cameo that I was not expecting! The Mandalorian manages to deliver a perfectly paced story, introducing iconic characters and expanding on a favoured culture – there is no slowing down on the quality and the atmosphere! Star Wars is in good hands with Jon Favreau and Dave Filoni. On to the next episode!

Look for our future PODCAST where we will review the episode in greater detail! 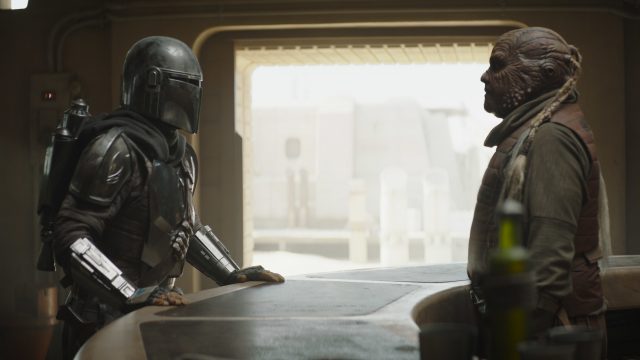 A New episode of The Mandalorian will stream every Friday on Disney+.

The Mandalorian and the Child continue their journey, facing enemies and rallying allies as they make their way through a dangerous galaxy in the tumultuous era after the collapse of the Galactic Empire. “The Mandalorian” stars Pedro Pascal, with guest stars Gina Carano, Carl Weathers and Giancarlo Esposito. Directors for the new season include Jon Favreau, Dave Filoni, Bryce Dallas Howard, Rick Famuyiwa, Carl Weathers, Peyton Reed and Robert Rodriguez. Showrunner Jon Favreau serves as executive producer along with Dave Filoni, Kathleen Kennedy and Colin Wilson, with Karen Gilchrist and Carrie Beck serving as co-executive producers. The writers for this season are Jon Favreau, Dave Filoni and Rick Famuyiwa.