The creators of the video, CinemaWins, has taken a more positive approach to reviewing our favorite films.

“My channel is inspired by CinemaSins. I use a similar format specifically to be their opposite. In no way am I saying that their Sins videos are wrong or are anything but amazing and hilarious. This is just my spin on films that I think don’t get the respect they deserve or are so good they need to be celebrated. Or more often, stupid crap that made me laugh and want to watch it again.” – CinemaWins

With all the many critical videos and reviews of the Star Wars films online, it was refreshing for me to have found this from CinemaWins. Not just because it was a positive look at the films I love so much, but it wasn’t a review that went overly positive with an intention to “suck up to Lucasfilm”. The video makes points we can all agree on and acknowledges how some people may disagree. I am pretty sure I agree with everything in this review but it wasn’t hard to agree. Right is right…am I right?

I was a kid when I first watched Star Wars: A New Hope when it released in theaters in 1977 and I was instantly obsessed! When the end credits first came up, I only knew these “truths”: 1) I wanted to be Luke Skywalker (and still do), 2) I wanted Han Solo to be my Father, 3) I wanted an X-Wing to fly around town in, 4) I wanted Princess Leia as my girlfriend and, 5) (as a child that was bullied), I wanted Chewbacca for a bodyguard! 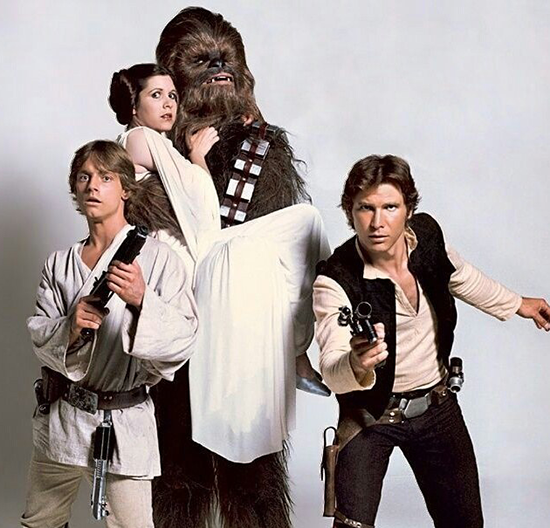 As every fan will say about their first experience, Star Wars affected me greatly. Not only for the action and excitement not seen before on film but how people could relate to the heroes on the screen. I remember how I felt that I could relate to the story of Luke on Tattooine. Living in a small town, I felt alone and trapped sometimes. Even at a young age, I wanted that kind of excitement. Of course, when I met one of my childhood friends, Todd, who also shared this passion for Star Wars and the toys – I was able to travel off of my own “Tattooine” and fly off on adventures to fight the evil Empire.

My favorite part of A New Hope was the Death Star assault. The Death Star assault scene had me on the edge of my seat! I was thrilled and stressed as the Rebels ships flew though the trenches fighting Tie Fighters while they looked for the exhaust port! Could Luke stop the Death Star om time? Will he use the Force? As the music by John Williams kept ramping up as the final climactic shot of torpedoes from Luke’s X-Wing hit its target, I help my breath… until the explosion! I remember cheering along with all the other kids and adults around me! I played that scene over and over again with my Kenner X-Wing and “Farmboy” Luke Skywalker in my backyard. I wish I still owned them. I would play that scene again in my backyard now, even with the puzzled looks from my neighbors!

I like one of the quotes that the video ends with regarding why Star Wars was loved so much,

“Star Wars is THE hero’s journey, an adventure film like no other. It’s a long time ago in a galaxy far, far away, but it’s clearly futuristic to us. What makes Star Wars so different was that A New Hope represents a lived in, realistic, dirty, grimy, malfunctioning universe. This is what made Star Wars unique.”

Now if you’ll excuse me. I feel the need to watch A New Hope with my daughters. #MTFBWY